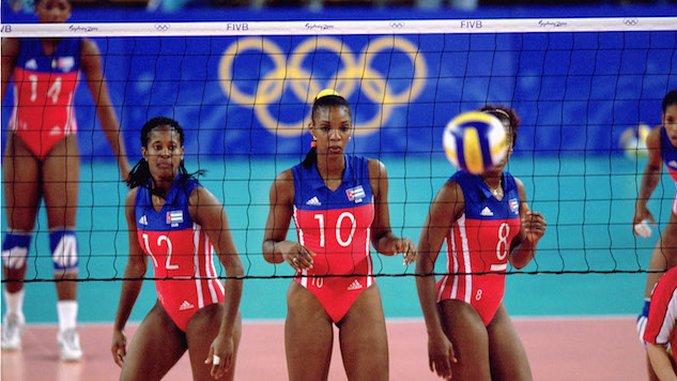 Cuba has managed to capture Olympic magic quite often over the past century, despite having few resources to devote to international sporting events. The Caribbean island nation made its Summer Olympics debut during the 1900 Paris games, and has since amassed a total of 202 medals: 71 gold, 65 silver and 66 bronze. This is despite the ‘80s marking a medal drought for Cuba due to the Soviet and North Korean-led boycotts of the Games.

With its storied journey leading up to the 2016 Rio Olympics, the Republic of Cuba’s current spotlight — thanks in part to the recent end of a travel ban from the United States — is brighter than ever.

To celebrate the nation’s groundbreaking athletic success (and those chic Louboutin-designed uniforms!), let’s take a look back at the the most memorable moments of Cuba’s Olympics runs.

Perhaps the country’s most prolific Olympic sport, boxing has brought Cuba a total of 67 medals to date—including 34 in gold. And as the Cuban Heritage Collection at the University of Miami Libraries notes, the country’s won boxing gold medals “in every Olympic since 1972 with the exception of 2008.” In the 1972 Munich Games, Orlando Martínez, Emilio Correa, and Teófilo Stevenson led a three-way boxing rout, winning gold in the bantamweight, welterweight, and heavyweight events, quite an impressive feat.

There’s no doubt the country’s strong boxing heritage will be felt throughout the 2016 games —2012 London champion Robeisy Ramírez is set to re-enter the Olympic ring at Rio.

Back in 1900, Ramón Fonst, a 17-year-old fencer from Havana, became the first Cuban and first Latin American medal-winner in Olympic history when he won the gold medal in the epée competition. He defended his victory in 1904 along with compatriot and fellow gold medalist Manuel Díaz.

Over the years, running has been considered yet another athletic achievement in Cuba’s Olympic history. This goes back to the 1968 Olympics in Mexico City, where sprinter Miguelina Cobián led the women’s team to a silver-medal victory in the 4×100 meter relay.

Cubans continued to rack up the silverware at the Montreal 1976 Olympics, when Alberto Juantorena “became the first and only runner to win both the 400 and 800 meter sprint.” Quite literally following in his footstep decades later, in 1992 Ana Fidelia Quirot took bronze in the 800 meter sprint in Barcelona.

Running wasn’t the only thing on the Cuban team’s mind in Spain that year. The 1992 games in Barcelona also marked the country’s best performance in its entire Olympics history. The Caribbean nation ended the summer fifth in the overall medal count: 14 gold, six silver and 11 bronze medals. This was also the year when the legendary Félix Savón won his first of three career heavyweight gold medals in boxing.

Topping Latin America in Gold MedalsThe London 2012 games marked an entirely new milestone for Cuba. The country took the world by surprise—given that its population is just over 10 million—when it topped the gold medal count among all participating Latin American nations. Its athletes managed to win medals in athletics, boxing and judo, among other Olympic competitions.

With the world’s eyes on Cuba once again, the country will no doubt will undoubtedly make the most of it in Rio this year. Tune in to see the Cuban Olympics team participate in 18 Olympics sports this summer, including volleyball, wrestling, judo, athletics and—of course—boxing.