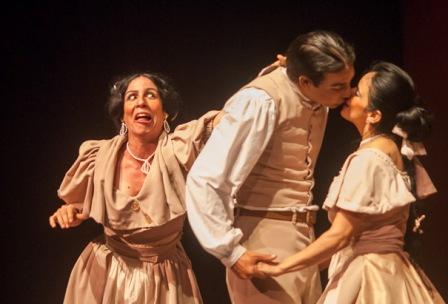 “This two-act play was adapted by playwright and reviewer Norge Espinosa, while Nieves Laferté is its costume designer.” Freddy Núñez Estenoz –director of Teatro del Viento- told the press.

A total of 28 theatre plays, out of 80 previously assessed by a panel of judges, will appear on stage in this year’s edition of the festival.

Núñez Estenoz, who is also the art director of this Festival, told those attending the press conference that from October 3 to 11, theatergoers will be able to enjoy a selection of the best theatrical offerings of Cuba.

Theoretical discussions of this biennial event will begin on Saturday. Celebrated theatre directors from Brazil, Venezuela, Chile and Argentina will take part in the sessions.

Participants will reflect upon a wide array of issues including the Cuban theater today, reality and stages, new trends and ways of producing and making theater, rituals and performing art, conceptual delimitation and spaces for interaction.

In addition, the literary work of Camagüey-born poetess and dramatist Gertrudis Gómez de Avellaneda -to whom this festival is dedicated in the year of her bicentenary- will center an important part of debates.

Cuba’s National Theater Festival was established in 1983, at the initiative of local playwright Rómulo Loredo. Over the last years, this event has become an ideal space to get an overview of Cuba’s theater scene and make an analysis on the future challenges and prospects. (Prensa Latina/Radio Cadena Agramonte)