Cuba’s Lazaro Martinez: Is He the World’s Next 60-Foot Triple-Jumper? 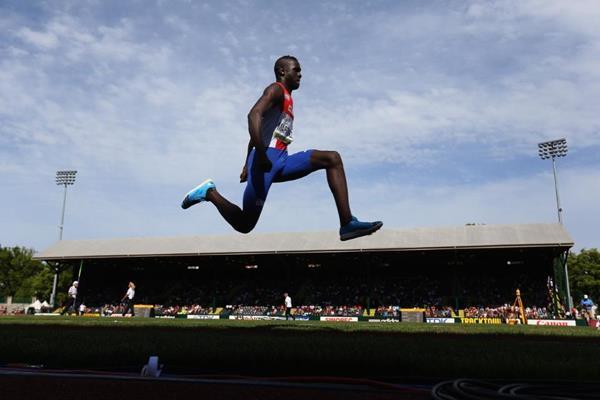 Sixteen-year-old Cuban triple-jumper Lazaro Martinez appears to have all the physical tools necessary to pierce the barrier only one other human (Britain’s Jonathan Edwards) has broached—the 60-foot mark.

He is six feet, three inches tall, has plenty of natural speed and launches from the wiry haunches of a still-growing youngster.

Considering all that the youthful Martinez has accomplished, one can only imagine how far a little more maturity, experience and training can propel him in the sand.

Martinez, along with two other Cubans, is among the top six jumpers in the world this year.

He already holds the World Youth record of 56 feet, 6 1/2 inches (17.24 meters), is the reigning World Junior champion and has competed against the world’s elite senior jumpers in three Diamond League competitions in 2014.

However, in Martinez’s brief but impressive portfolio of achievements, perhaps the most fascinating takeaway is what yet could be achieved.

At the IAAF World Junior Championships in Eugene, Oregon, in July, Martinez clearly left at least 12 inches on the toe board (see YouTube video) on his winning jump of 56′ (17.13 meters). A perfect placement of his launch foot would have put him tantalizingly close to a new World Junior record and into the conversation among the current world’s best pros.

Also, while Martinez’s first two strides appear to be technically sound—indeed, he nearly exhausts the runway with his second lunge—the third phase (into the pit) stands to benefit the most from improved form. For such a soaring, lanky jumper, Martinez has a personal best of “only” 23’7″ (7.19 meters) in the long jump.

A two-foot improvement in the long jump seems feasible over the next three seasons and would get Martinez well on his way to a podium finish in the triple jump by the 2017 World Championships.

And still he would not yet be 20 years of age.

Over the years, Cuba has produced many great triple jumpers. Yoelbi Quesada, Alexis Copella, Yoandri Betanzos and Yargelis Savigne come to the forefront. Current world leader Pedro Pablo Pichardo (58’3″, 17.76 meters) and Ernesto Reve (57’8″, 17.58 meters), along with Martinez, make Cuba the deepest triple jump threat in the world. So, the young Cuban has that going for him.

This also seems to be a popular time in track and field history for some longtime imperial barriers to come down. French pole-vaulter Renaud Lavillenie recently eclipsed the elusive 20-foot barrier in taking down Sergey Bubka’s world indoor record.

The 8-foot barrier in the men’s high jump is perilously close to falling again as well, 21 years after the great Cuban leaper Javier Sotomayor set the world mark at 8′ 1/2″, (2.45 meters). Three current jumpers—Bogdan Bondarenko (Ukraine), Mutaz Barshim (Qatar) and Ivan Ukhov (Russia)—are teasing that barrier regularly in one of 2014’s most intriguing events.

Martinez, if he can catch the wave, has that going for him.

Finally, Cuba did not produce such a rich lineage of triple-jumpers without good coaching. Manuel Guilarte provided the foundation and instilled in Martinez a love for the sport. Marcos Juvenal is the veteran National Juniors team coach who has guided Lazero through the maze of international competition.

For a 16-year-old kid, that is definitely a plus.

And here’s one more subtle advantage Martinez might have if Edwards’ record ever seems approachable: He won’t have the mental battle that a 60-foot barrier would wage with American minds. To him, it will just be some silly centimeters.