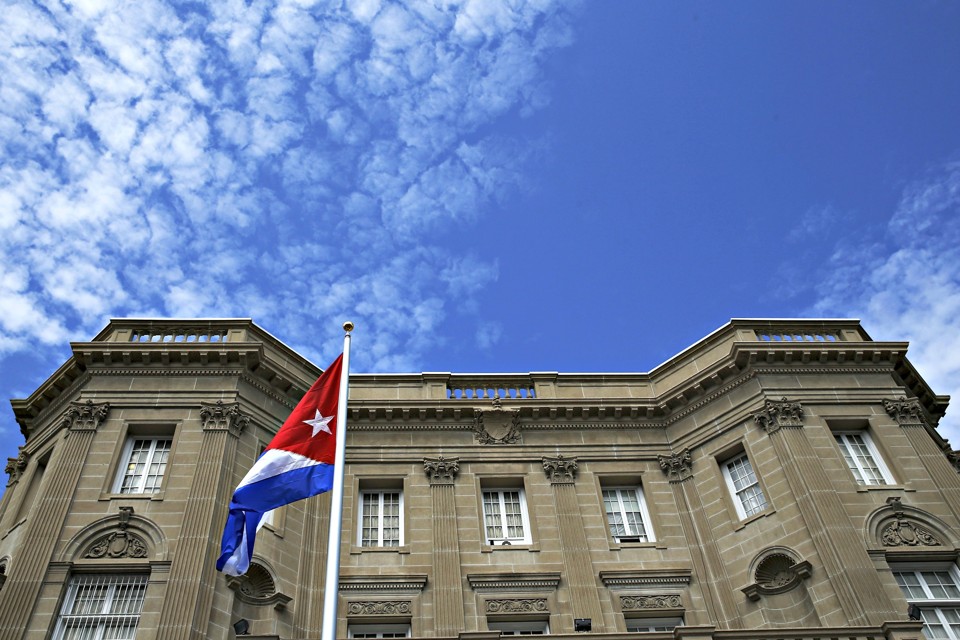 The country has a whole arsenal of unique drugs locked behind the U.S. embargo.

Last week, in a historic first, a box of water made it from Havana to Buffalo, New York. It was roundabout journey, since you can’t just FedEx a box from Cuba to the U.S. (The embargo, no commercial cargo flights, etc.) The box flew first to Toronto. Customs brokers then escorted it across the U.S.-Canada border to its final destination at Roswell Park Cancer Institute.

Why such a production for a box of water? It was the test run for a promising lung-cancer vaccine called CIMAvax, which was developed in Cuba and soon will begin clinical trials in the U.S. But no one in America has ever run a clinical trial with Cuban drugs, and no one was even sure, logistically, how to ship fragile cargo between the two countries. (Again, the embargo, no commercial cargo flights.) So the researchers devised a roundabout route and tested it with this box of water. “We actually wanted them to ship a box of beer,” joked Ke lvin Lee, an immunologist at Roswell who helped forge the C uban collaboration, “but it turned out to be too complicated .”

This shipment came, of course, at a time of thawing relations between U.S. and Cuba. The embargo is still in place—only Congress can vote to lift it—but the Obama administration has been issuing executive actions easing restrictions on trade and travel to the country. Last month, the administration made it easier to carry out joint U.S.-Cuban medical research, and the Food and Drug Administration promptly followed by approving clinical trials for the Cuban lung-cancer vaccine at Roswell.

CIMAvax is so interesting, scientifically speaking, because it belongs to a new class of cancer treatments called immunotherapy. Rather than using a scalpel, radiation, or chemicals to take cancerous cells out directly, immunotherapy stimulates the patient’s own immune system to fight cancer. A few immunotherapies are already on the market, and pharmaceutical companies are racing to develop the next. For the past two decades, Cuba, a country with a tiny biomedical research budget, has been quietly sitting on CIMAvax. And this vaccine could be just the first of several Cuban drugs, currently locked behind the embargo, to make to the U.S.

The collaboration between Roswell and Cuba’s Center for Molecular Immunology, which developed the vaccine, actually began in 2011, years before the Obama administration started easing restrictions on Cuba. Gisela Gonzalez, one of the Cuban researchers working on CIMAvax, was visiting family in Pittsburgh when she cold-called one of Lee’s colleagues a t Roswell.** She wanted to give a talk about the research they were doing in Cuba.

“We were not thinking about Cuba at all,” says Lee. “Our image of Cuba was from back in the I Love Lucy days. We didn’t consider they had really advanced cancer treatments.” But Cuba manages to punch far above its weight in medicine. Although the country lacks access to advanced medical equipment due to the embargo, life expectancy in Cuba is even a bit higher than in the U.S. Its strength is a robust primary-care system that focuses on disease prevention.

That’s how CIMAvax came along, too. In the 1980s, Cuba developed a vaccine to prevent meningitis, a bacterial infection of the membranes around the brain. The vaccine uses pieces of protein from meningitis bacteria, which signal “hey, I’m foreign” and switch the immune system into attack mode. One particular protein, they found, was especially good at activating the immune response.

So when researchers at the Center for Molecular Immunology turned their attention to lung cancer—then the number-two killer in Cuba—they didn’t start from scratch. They took that unusually powerful meningitis protein and fused it to part of another protein called epidermal growth factor, or EGF. EGF is important for controlling cancer because, as its name implies, EGF makes cells grow, and cancer is essentially cells growing out of control. When injected, this fused hybrid protein kicks a patient’s immune system into high gear (thanks to the meningitis) and targets cancer cells (thanks to the EGF). That’s how CIMAvax is supposed to work. It’s called a vaccine because like other vaccines, it stimulates the immune system, but it is actually used to treat rather than prevent lung cancer.

Lee recalls learning all this for the first time at Gonzalez’s talk. “I’m just sitting in the audience and going, ‘That’s really amazing,’” he says. CIMAvax had been approved in a handful of Latin American countries by then, and a handful of desperate American patients have since traveled abroad to get CIMAvax. The vaccine doesn’t necessarily kill cancer cells, but it slows their growth enough to prolong patients’ lives by several months in trials. And its side effects are mild, especially compared to how chemotherapy can ravage the body.

So the Roswell and Center for Molecular Immunology started working together. It wasn’t your typical collaboration though. Calling Cuba is expensive (something like a dollar a minute), and the country only has slow dial-up internet. And then there was all the complications from the embargo, which made moving materials or money between the countries pretty much impossible.  “This has been a very challenging atmosphere for them to collaborate in,” says Gail Reed, the founder of MEDICC, a nonprofit that promotes U.S.-Cuban partnerships in medicine. “It’s really to their credit that they have been pursuing it.”

As the Obama administration looked into restoring relations with Cuba, politicians, law firms, and nonprofits interested in Cuba started paying attention to CIMAvax. MEDICC was one of those nonprofits, and it wrote a white paper detailing policy changes that would make collaborations like the one over CIMAvax less challenging. The executive actions on medical research last month largely reflect those recommendations. And Lee himself has since made about a dozen trips to Havana.

Roswell is now recruiting patients to its clinical trial for CIMAvax in New York. This trial will be a rigorous test for how well the vaccine works. “There have been trials done outside of U.S., and when we test in U.S., they sometimes don’t give us the same results, because the way we conduct clinical trials is very strict,” says Erminia Massarelli, an oncologist specializing in lung, head and, throat cancer at City of Hope cancer treatment center. “We will have to see if this vaccine is truly successful. We hope so because we’re hoping for better treatment.”

Regardless of how well CIMAvax itself works, it will blaze a path for medical collaborations with Cuba. Behind CIMAvax, Roswell has prepared paperwork for clinical trials on a second cancer immunotherapy candidate from Cuba, and it’s interested in several more. Cuba also has developed other cost-effective treatments that are currently unavailable in the U.S., such as injections for diabetes-related foot ulcers and the meningitis vaccine that predated CIMAvax. “This first trial really is the stone that we’re throwing in the pond to see what happens,” says Lee.

The collaboration has brought about all sorts of changes already, from explicitly allowing the FDA’s policy to approve Cuban pharmaceuticals, to changes as mundane as getting Cuba’s regulatory agency to follow the same drug application formats as the U.S. and other countries. Altogether, they could signal Cuba’s slow reentry in the global community. And FedEx has announced plans for commercial cargo service between the U.S. and Cuba next year. Eventually, shipping a box of medicine from Havana to Buffalo may be no harder than shipping a box anywhere else in the world.