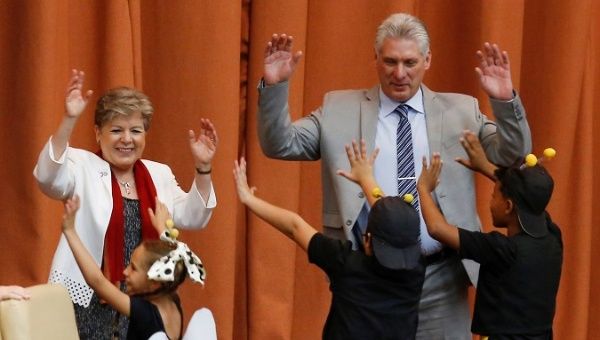 The new Cuban president said inequality in Latin America is “associated with the colonial past of our nations.”

May 10 (teleSUR) Speaking at the opening ceremony for the 37th session of the Economic Commission for Latin America and the Caribbean (ECLAC), new Cuban President Miguel Diaz-Canel spoke about the need for a greater regional integration to promote economic growth and reduce inequalities in the continent.

“There is no other option but to advance regional integration and development with equity,” said Diaz-Canel, who also recognized the role of ECLAC in promoting a development model centered on equity  in the region, on Tuesday.

He also pointed at the agency’s scientific studies, which address the structural causes of inequality in Latin America, in reference to “The Inefficiency of Inequality” report that was presented just a day ahead of the opening ceremony.

“It is an inequality associated with the colonial past of our nations, which affects in particular indigenous people, African descent population, girls and women,” he said at the ceremony, which was attended by representatives of the 45 member nations of the ECLAC, its executive secretary Alicia Barcena and the U.N. General Secretary Antonio Guterres.

He regretted that many nations in the region have promoted neo-liberal agendas based on macroeconomic policies that only benefit multinational corporations and those who are already rich, fostering social difference and discrimination.

Cuba is now the agency’s rotatory presidency, a position it will hold for two years. The summit is being held at Havana’s Convention Center from Tuesday to Friday.

“We have received the presidency of ECLAC with a high commitment and awareness of the challenges we face, focused on continuing to promote cooperation among the countries of the region,” said Diaz-Canel, who became Cuba’s president on April 19, “Cuba is committed with ECLAC, regional integration and solidarity amongst our nations to continue advancing together despite our diversity.”

“We work on a national economic and social development plan until 2030, whose strategic axes are linked with the U.N. Sustainable Development Goals,” he added.

Diaz-Canel pledged to continue its commitment with ECLAC’s agenda and focusing on the most vulnerable people, promoting a development model based on a just society with equal opportunities for all.

When handing in ECLAC’s rotating presidency to Cuba, Francisco Guzman, head of the agency’s Office of the President, said he supported Cuba in its new presidency.

The meeting’s main discussion topics include the fight against inequality and promoting South-South cooperation, included in the 2030 Agenda for Sustainable Development.

Speaking on Monday at a ceremony marking the Cuban National Day, Barcena said Cuba is “a relevant example of how much can be done in favor of South-South cooperation.”

She recognized that Cuba has been working and collaborating with other countries aiming to strengthen health and equality, saying that “it’s about growing for equality, and equality for growth.”