Posted on September 25, 2018 by Anthony Brenner 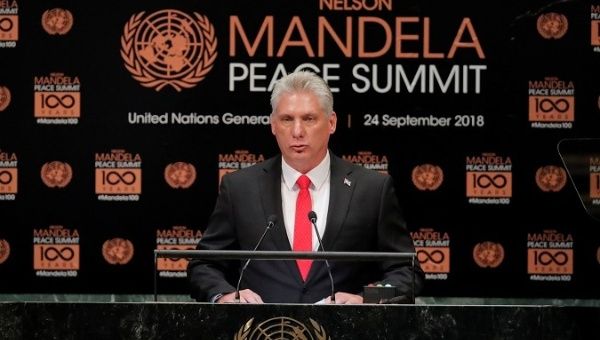 Telesur Sept. 24, 2018 — President of Cuba Miguel Díaz-Canel remembered the former South African President Nelson Mandela during a peace summit in his honor on Monday at the headquarters of the United Nations in New York, where he stressed that “world peace is threatened by the philosophy of domination” and that there is still much to go to realize Mandela’s dreams.

He warned that the displaced and the hungry fleeing from wars are “victims of a silent and silenced segregation” and called for addressing the main causes that prevent peace from prevailing.

In this sense, he asked for “acts rather than words, cooperation instead of intervention, solidarity and not looting”.

He also recalled that Cuba supported the struggle of the South African independence fighters and the historic alliance between late Cuban leader Fidel Castro and the anti-apartheid leader.

Mandela is world-renowned for his fight against racial discrimination in his country, however, he was considered a terrorist by the United States until 2008.

The Cuban president arrived in New York Sunday to participate in the 73rd General Assembly of the U.N. where he plans to denounce the consequences of the economic and financial blockade that the United States maintains against the island.