Cuba’s Castro at UN calls for end to US embargo

Posted on September 28, 2015 by Anthony Brenner 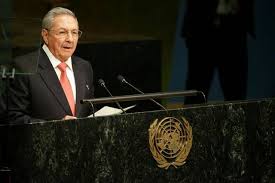 September 26, 2015 | United Nations (United States) (AFP) – Cuban President Raul Castro on Saturday took aim at the US embargo against his country, describing it as the “main obstacle” to his country’s economic development.

“Such a policy is rejected by 188 United Nations member-states that demand its removal,” Castro told a UN development summit, referring to a UN resolution calling for the end of the decades-old embargo.

The UN General Assembly has voted each year since 1982 to approve a resolution calling on the United States to lift the embargo against Cuba, which has been in place since 1960.

Making his first visit to the UN, Castro hailed the re-establishment of relations with Washington as a “major progress,” but stressed that the embargo was unfinished business.

“The economic, commercial and financial blockade against Cuba persists, as it has been for half a century, bringing damages and hardships on the Cuban people” said Castro, who succeeded his brother Fidel as president in 2006.

Cuba estimates that more than $121 billion in damage has been inflicted on its economy from the embargo, which was imposed in retaliation for Cuba’s nationalization of US properties on the island.