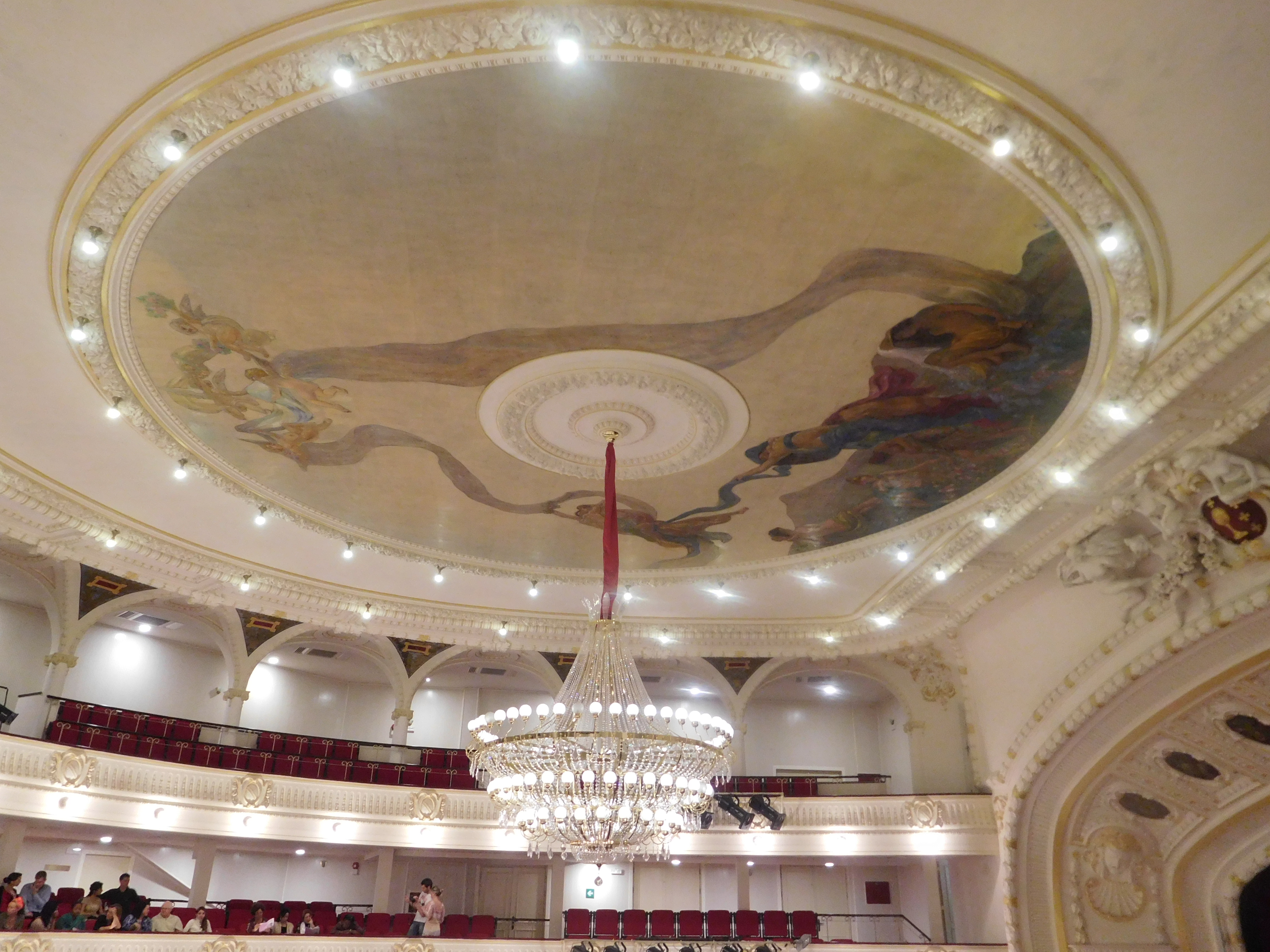 The Gran Teatro de La Habana Alicia Alonso, the newly remodeled theater which houses the Ballet Nacional de Cuba, is a striking building both inside and out. When darkness falls over Old Havana, the theater’s neo-baroque walls are illuminated by stark lights, creating the arresting impression of an unlikely meeting between the grandiose past and a neon-bright future. Inside the spacious Sala García Lorca, where performances take place, the feeling of simultaneous decadence and innovation continues. The rows of plush red floor seats lead up to an orchestral pit where sleek-looking men and women dressed entirely in stylish black tune their instruments; a high ceiling hosts an elaborate painting as well as an immense chandelier whose glitter seems to fill the theater. As I take my seat in the fourth balcony, someone behind me whispers in English, “There she is! That’s her!” I let my gaze follow the pointed fingers and find a miniscule, ancient-looking lady making her way to a seat in the balcony below us. She moves slowly and is clad entirely in crimson, from her head wrap to her all-enveloping cloak. Her name is whispered reverently: “Alicia Alonso.” The founder of the Ballet Nacional de Cuba and the namesake of the new theater, she is an international ballet legend.

At 95, Alicia Ernestina de la Caridad del Cobre Martínez Hoya Alonso is a living representation of Cuba’s long and rich ballet history. Today she is the artistic director of the National Ballet, a UNESCO goodwill ambassador, a staunch public supporter of the Cuban Revolution, and among the country’s most essential cultural symbols. Sixty years ago, she was considered one of the world’s greatest dancers.

Alicia Hoya was born in Havana in 1921. The daughter of a wealthy army officer, she knew even as an ambitious nine-year-old that she wanted to make dance her life’s work. She studied, and excelled in, dance at the Sociedad Pro-Arte Musical until age 16, when she married Fernando Alonso, another ballet student, and moved with him to New York—not an uncommon occurrence in the 1930s. In fact, at the time, Alonso has said, young aspiring Cuban dancers had to leave the country in order to achieve their goals. How, then, has Cuba acquired such an outstanding international reputation for its unique ballet tradition? It’s not inaccurate to say that Alicia Alonso is singularly responsible for developing Cuba’s standing in the international dance community.

After getting a foothold in the city as a member of the chorus line in Broadway musicals, Alonso became a soloist for the American Ballet Caravan, which would later become the New York City Ballet. Then in 1941 Alonso became one of the first members of the American Ballet Theater. While training and performing with the American Ballet Theater every day, Alonso also continued to take classes outside of the company—a grueling routine which made her friends caution her to slow down, but which built such strength and technical skill that critics began to call the twenty-year-old a rising star.

But that same year, the ballerina hit an obstacle that stopped her in her tracks. Alonso’s recently increasing vision problems led to the discovery that she had a detached retina. Over the next year and a half, Alonso would go through three surgeries and months of complete bedrest. Unable to move most of her body, much less dance, Alonso was taught new dance routines by her husband, using their fingers. During this time Alonso learned in her head to dance the lead role of the classic ballet Giselle, while blind and bedridden.

She had barely returned to the world of dance and was still partially blind when in 1943 she was asked, quite suddenly, to take the place of the American Ballet Theater’s injured prima ballerina as none other than Giselle. She would dance the part for the next five years, also performing in Swan Lake and Balanchine’s spectacularly difficult Themes and Variations as well as others. During this time, Alonso’s supreme technical talent and, even more so, her intensely passionate and dramatic style catapulted her to the top of the worldwide ballet scene. She, her partners, and set designers worked so hard to compensate for her partial blindness that audiences reportedly had no idea she was visually handicapped.

It was in 1948 that Alonso, having firmly established herself internationally as a top-tier ballerina, decided to return to Cuba to start the Alicia Alonso Ballet Company in Havana. At the time the school was funded largely by wealthy Cuban families, but by the mid-1950s, the company faced great financial and political danger. President and dictator Fulgencio Batista had come to power, and Alonso was a vocal member of his public opposition. After Alonso rejected a bribe attempt at stopping her criticism, the Batista regime cut all funding to the company. In 1956 Alonso folded the school and left the country, to dance in the Soviet Union for the next three years.

In 1959, Alicia Alonso was drawn back to her home country by the rapidly changing politics of the Revolution. Fidel Castro, as part of his commitment to the development of cultural programs in Cuba, reached out to Alonso personally to ask what she needed to make her dreams for her company a reality. The result was an influx of government funding for what would now be called the Ballet Nacional de Cuba.

Since 1960 the Ballet Nacional has been one of Cuba’s most important culture icons. Its dancers have danced in small rural towns throughout Cuba on Castro’s cultural outreach campaigns; they have also danced in 58 countries and have won hundreds of international competitions. After more than half a century and almost completely blind, Alonso remains the Ballet Nacional’s artistic director and head choreographer. How? She uses her assistants to interpret her directions, and says, “I show them by moving my arms, and they understand perfectly well.”

Alonso’s dedication to the classic style of ballet and her uniquely creative vision are both apparent in the choreography of The Magic of Dance, a ballet anthology that has run for years at the Gran Teatro. The show, which includes scenes from classics like Swan Lake, Giselle and The Nutcracker, opened on the night I attended to a wildly enthusiastic crowd. Each lead dancer executed gorgeous performances, and was received by whistles and cheers from an audience similar to what you expect from a rock concert. All of it was and is Alonso’s doing, and the world has her to thank for building the Ballet Nacional de Cuba into one of the most exceptional ballet legacies in history.