Cuban Youths to Share Experiences at Social Forums in Panama 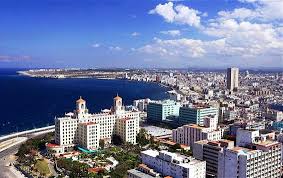 Havana, Apr 5 (Prensa Latina) The Cuba youths who will participate in the forums to be held parallel to the 7th Summit of the Americas in Panama said on Sunday that they will present their reality and will share their experiences to contribute to building a better continent.

We, Cuban youths, expect to contribute our experiences to the construction of the lines of the continent that we need, journalism student Jorge Enrique Jerez told the newspaper Juventud Rebelde. Our main purpose will be to show a country that it is not perfect but it is among the fairest countries in the world, he stressed.

Being there will give us the opportunity to show a Cuba that is different from the one that is portrayed every day by large media organizations, Jerez said in allusion to the US media campaign against the Cuban Revolution.

In that context, he assured, the Cuban youths will bring forth issues that concern Cuban society, such as demanding an end to the criminal economic blockade that Washington has imposed on us for more than half a century, a policy that affects the normal development of Cuban youths.

We will present Cuba’s achievements in human rights, including people’s access to health care, education, citizen’s security, democracy and other concepts that, in our country’s case, are often manipulated from abroad.

We will talk about how the Revolution guarantees our rights as human beings, from the most elementary right, the right to life, to others that are sometimes forgotten by the governments, such as education, health care and culture, Jerez added.

Regarding those topics, we, Cubans, have a lot to say, although that does not exclude that we can listen to other models’ experiences to enrich our own model, taking the positive elements. We will go to Panama to show a real Cuba, seen by the youngest people, he concluded.

For his part, the president of the University Students’ Federation (FEU) at the University of Medical Sciences in Sancti Spiritus, Alejandro Mesa, said that Cuba has a lot to contribute to the Forum of Youths to be held in Panama.

In that regard, he pointed out that the desires and utopias of other nations are realities for Cuba, an example of which are free education and health care for all without distinction of gender, race or religious belief, rights that are enshrined in the Constitution.

Mesa recalled that Cuban students are heard to the point that local institutions have had to evaluate policies, reach agreements and modify resolutions to responds to their ideas and dissatisfactions.

For his part, the vice president of the Hermanos Saiz Association, Rafael Gonzalez, underlined that Cuba will present its vision in a wide range of topics that include environmental initiatives and the socialization of several cultural experiences.