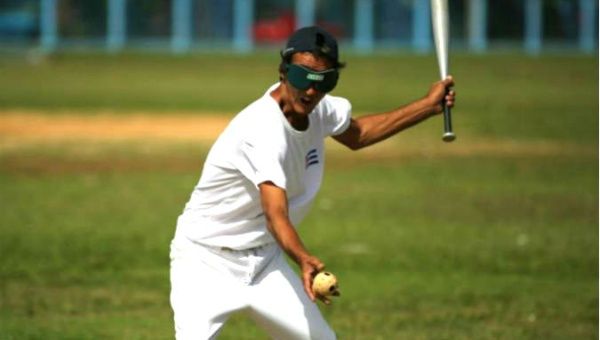 Gilberto Arteaga, who is visually impaired, participates in a baseball lesson at the Changa Medero stadium, in Havana, Cuba. | Photo: Reuters

Baseball, Cuba’s national sport, was cited as one of the main athletic disciplines that have suffered during the past five decades under the blockade.

Oct 24 – Cuban officials from the National Institute of Sports, Physical Education and Recreation, INDER, have detailed some of the historical and ongoing damages the U.S.-imposed economic blockade has had on Cuban sports.

They gave their report during a press conference at the Adolfo Luque function room located in Havana’s Latinoamericano Stadium.Baseball, Cuba’s national sport, was cited as one of the main athletic disciplines that have suffered during the past five decades under the blockade.

Cuba recently contracted a Mexican sporting company to provide Cuban baseball teams with cleats and other gear needed to practice the sport. The total value of the contract was US$114,489. The exact same equipment, had Cuban sporting officials had the ability to purchase them in the United States, amounted to US$22,789 less.

Mizuno baseballs, used in Cuba’s National Series competition, are imported all the way from Japan. They cost approximately US$8 per ball, according to Granma. However, U.S.-based Rawling brand baseballs would cost Cuban sports officials only US$5 per ball.

Being that U.S. businesses also suffer under the blockade against Cuba, Trobajo noted that Cuban sports teams are forced to seek supplies from Europe and China. Considering transport costs alone, such items are always greater in cost than U.S. suppliers.

However, Pavel Pino, INDER’s director of Sports Medicine Institute, pointed out that U.S. scientific and sporting institutions continue to have interest in collaborating with their Cuban counterparts despite the current U.S. administration’s hardline stance on the Caribbean island.