Posted on October 1, 2018 by Anthony Brenner 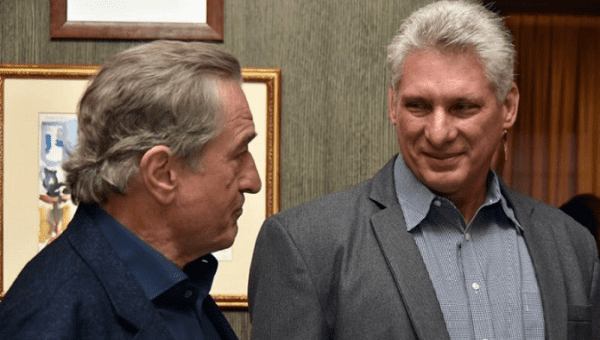 Cuban President Miguel Diaz-Canel met with renowned U.S. actor Robert De Niro Friday where the importance of cultural ties between two countries was discussed. The actor asked the governments of Cuba and the U.S. not to build cultural walls between people and rather build bridges to connect them.

The meeting took place in the Dakota building in front of which musician John Lennon was assassinated, in New York city where apart from De Niro, producer and executive director of the Tribeca Film Festival Jane Rosenthal, Katie Holmes, Alex, and Carol Rosenberg, founders and organizers of the Havana Film Festival in New York and other artists, philanthropists, and cultural promoters from the U.S. were present.

Criticizing the current Trump administration’s approach to Cuba, De Niro added, “While there are many problems between the two countries, I hope they eventually disappear, but the current (U.S.) President is not helping with the situation.”

Diaz-Canel expressed his gratitude for being invited by the U.S. artists and wished for more cultural ties in the future. He also recalled artistic links between the two countries giving examples like links in jazz, Ernest Hemingway’s closeness with Cuba, etc.

The president congratulated the successful Festival Artes de Cuba held at the John F. Kennedy Center for Performing Arts in Washington D.C. in March which saw the participation of more than 400 Cuban artists.

He also highlighted Cuba’s artistic education system which is universal, free and of high quality, despite U.S. blockade on Cuba.

De Niro also expressed his fondness of Cuba, a country he visited twice. “I love going to Cuba, I did not know I was so known there, people took pictures of me, they followed me, I was surprised, it was something wonderful,” he said.

Both the Cuban president and the actor reiterated their support for building stronger cultural ties as according to De Niro, “politics comes and goes, but culture remains.”