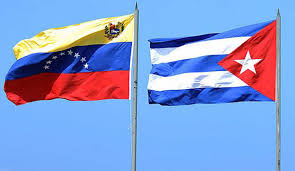 Caracas, Mar 6 (Prensa Latina) First secretary of the national bureau of the Young Communist League (UJC) of Cuba Sussely Morfa reiterated here today the need to continue united for Venezuela, given the aggressive attack of the United States against this country.

Morfa, member of the Cuban delegation attending the event of solidarity ‘Todos Somos Venezuela’ (We are all Venezuela), told the Prensa Latina news agency about the importance of strengthening the fight against imperialism and the neoliberal wave expanding in the continent seeking to destroy unity and integration in Latin America.

Morfa, also member of the Council of State of Cuba, called for promoting truth and reality of Venezuela, which is subject to an economic, commercial and financial blockade set up by the Government of President Donald Trump.

Morfa praised the increased solidarity in the world to defend Venezuelan democracy and sovereignty, and the admiration shown in the world for the resistance of the people of leader Hugo Chavez.

However, she called for increased efforts to support the cause of Venezuela, reiterating Cuba’s support for this country under any circumstances, which, she said, was ratified by Cuban President Raul Castro at the recent 15th Summit of the Bolivarian Alliance for the Peoples of Our America-Peoples’ Trade Treaty (ALBA-TCP) that was held in Caracas.

On the presence of Cuba in the event ‘Todos Somos Venezuela’, Morfa said that it shows Cuba’s undisputed confidence and support for Venezuela.