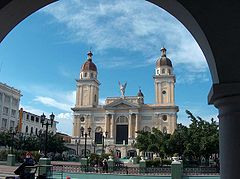 Santiago de Cuba, the former capital is on the far end of Cuba from Havana and is a major metropolitan center.  On the ground the city is about a 10-12 hour trip from Havana.  This distance aside there is plenty of tradition and entertainment talent in the area.

In the 2nd Cuba blog post on May 29 we noted the afro-Cuban and euro-Cuban branches of jazz.  A style called Cuban Son is pointed to as representing a large part of the afro-Cuban music.  In history, Son was credited with bringing the African drumming into the otherwise exclusive European scoring with horns and strings.  This style introduction brought rich opportunities to the music.

Son subsequently migrated to Salsa, and then broadened.  In current times Cuban Son has become quite diverse, bringing many modern variations of the classic early-1900’s Son music.  There is a great deal of music following the Son style in Cuba, including in this Santiago area.

A first-class singing talent from this area is the seven-girl group, Moreno Son.  A lot of their work is arrangements of traditional Cuban cultural & folk songs, frequently in the vein of material from “The Buena Vista Social Club.”  They frequently work with afro-Cuban accompanyment.  Try these four pieces.  Candela is a famous dance song.  It’s impossible not to be floated away on the groups’ spirit.  Three romantic folk songs from the Santiago area are Chan Chan, Para ti Nengon, and Esperare.

If either these groups are booked in your area seriously consider catching their show.

This Cuban series relates to the KCSM Spring 2015 jazz tour to Cuba, and to the second tour coming this October. For tour information consult the KCSM site:  key “KCSM Jazz 91″ in search.  At the home page, look down the right side about 1/3 of the way for a menu rectangle “Travel to Cuba with KCSM.”  Clicking this will lead to the tour company site. (If the KCSM menu item is not up you could consult the EarthboundExpeditions page directly.)