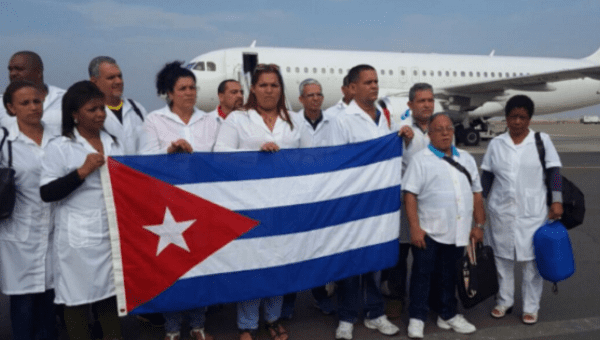 Quito, Mar 27 (Radio Cadena Agramonte) – Executives of the Cuban Medical Brigade that offers services in Ecuador signed the Code of Ethics, which reflects the principles by which their work is governed today.

In the text, the collaborators also ratify the solidarity, humanity, and love with which health personnel carries out their profession in many countries.

‘This is a process done in every brigade structure,’ explained the head of the mission, María Isabel Martínez.

As she expanded, the initiative is part of the internal self-control guide and the environment required in the Brigade.

For his part, the ambassador of Havana in Quito, Rafael Dausá, who attended the signing ceremony, pointed out that beyond a book, the idea is to take everywhere the example and the principles inculcated by the historical leader of the Cuban Revolution, Fidel Castro in the Cuban people and its professionals, in especially those of health.

Cuban collaborators took the opportunity to reopen the History Room, which contains images of the daily life of the mission, decisive moments such as the support offered to the Ecuadorians when an earthquake hit Manabí in April 2016, audiovisuals and the acknowledgments obtained over time, which they updated. (Prensa Latina)