Cuban Foreign Minister: There Is No Evidence of Sonic Attack 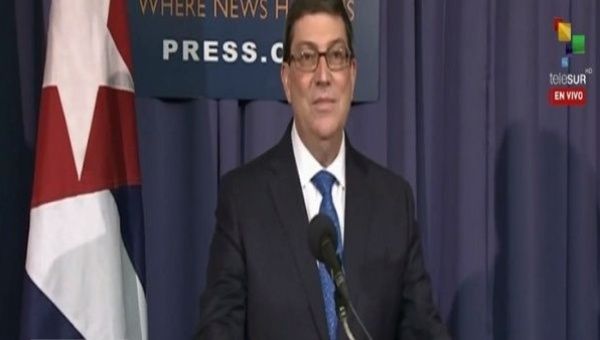 Nov 2 (TeleSUR) – Cuba’s foreign minister, Bruno Rodríguez, reiterated on Thursday that there is no evidence that a sonic attack has taken place against U.S. diplomats at the embassy in Havana, as the Trump government accuses.

“I urge the U.S. government to provide evidence of the alleged attack,” the foreign minister told a news conference at the Cuban embassy in Washington D.C.

He indicated that health afflictions reported by U.S. officials “cannot be due to a single origin or to a single fact, as it has not been corroborated when they occurred”.

Rodriguez stressed that relations between the Caribbean country and the United States have regressed significantly, as a result of the measures adopted by President Donald Trump and accusations of an alleged sonic attack in Havana.  Rodriguez further stated that relations between the two countries began to degrade on June 16 when President Trump decided to toughen the economic, commercial and financial blockade against Cuba.

“The setback in bilateral relations has been aggravated by the recent decisions of the U.S. government to reduce its personnel in its embassy in Havana and to expel 17 officials from the Cuban embassy in the U.S.,” he explained.