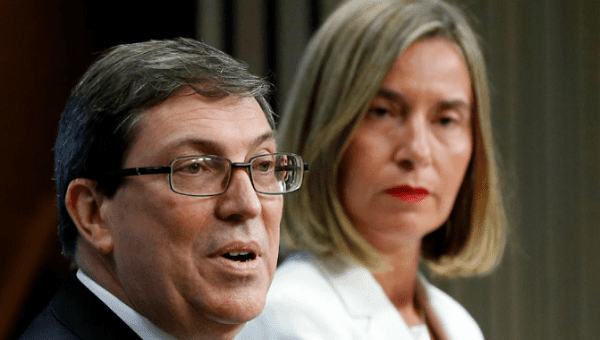 The European bloc will contribute US$ 21.5 million to help Cuba’s renewable energy sector and another US$ 23 million toward food security on the island.

During the meeting, the two discussed potential bilateral cooperation within the agricultural and tourism sectors and signed an agreement for the EU to give US$ 21.5 million in project support to Cuba’s 2030 goal to obtain a quarter of its energy from renewable sources.

The EU also agreed to contribute over US$ 23 million toward an existing food security program in Cuba.

“Today we celebrate an important step in relations between the EU and Cuba,” Mogherini said.

Mogherini denounced the six decades U.S. economic blockade on the island calling it “obsolete” and “illegal”, and reproached President Donald Trump for rolling back the diplomatic advances Barack Obama had recently made with Cuba.

“We want to construct a closer relationship based on open and frank dialogue and mutual respect and effective cooperation,” said Mogherini.

Today’s meeting bolstered growing economic and diplomatic relations between Cuba and the European bloc as the two signed the Political Dialogue and Cooperation Agreement in 2016, which was implemented last November.

The Cuban Foreign Ministry said of the agreement, “the relationships between the EU and Cuba will be developed, for the first time, under a contractual frameworkthat reaffirms the bases of respect, observance of international law and the principles included in the Charter of the United Nations.” As she signed the accord two years ago Mogherini said, “the EU and Cuba are truly turning a page, and the new chapter of our partnership begins now.”

Mogherini made her third diplomatic visit to Havana in January.

Last year the bloc imported nearly US$559 million worth of Cuban products and exported more than US$2.3 billion to the island.