Fernando González Llort, one of the Cuban Five anti-terrorist heroes, returned home to Cuba on Feb. 28, after serving his entire unjust prison sentence of 15 years. González was released from the federal prison in Safford, Ariz., the day before when he was handed over to U.S. Immigration officials and deported. 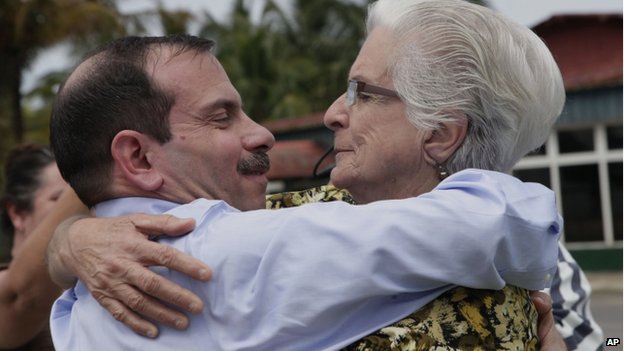 Minutes after his arrival in Havana Gonzalez embraces his mother

González was met at the Jose Marti International Airport by Cuban President Raul Castro, his mother, Magali, spouse Rosa Auroraand two sisters. Rene González (no relation), the first of the Cuban Five to be freed, was also there to greet his comrade, whom he had not seen since their trial in 2001. The mothers of all the Cuban Five and the spouses of still-imprisoned Hernández and Labañino were there to greet him, too.

On March 2, a concert was held at the University of Havana to celebrate González’s return and truly give him a hero’s welcome. “I publicly reiterate my infinite gratitude for these 15 years of support and struggle that I know will not cease until Gerardo, Ramón and Tony have returned,” González told the crowd, referring to the three members of the Five who remain unjustly imprisoned in the United States.

In an interview with the CubanitoenCuba blog right before his release, González explained how solidarity and the support of the worldwide “Free the Five” movement helped sustain his capacity to resist and survive inside the cruel U.S. incarceration system. “Knowing that you can count on the understanding and support of a whole militant people and hundreds of thousands of friends worldwide inspires more confidence in victory,” he said. “We would never have given up our principles. However, the solidarity and support that we have received from the Cuban people and so many other friends everywhere make your sentence easier to bear and become to us a commitment of resistance and combativeness.”

This points out how imperative it is that progressive activists everywhere redouble our efforts to free all of the Cuban Five. We must bring the campaign to free the Cuban Five into our community groups, unions, schools, neighborhoods and news media. Endorse and spread the word about the International Commission of Inquiry, which takes place in London March 7-8 (voicesforthefive.com), and endorse and participate in the upcoming third annual “5 Days for the Cuban 5,” which takes place in Washington, D.C., June 4-11 (5daysforthecuban5.com).