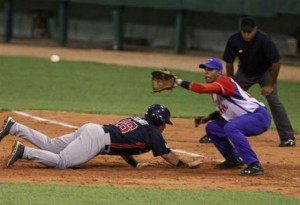 Cuba emerged with the victory, scoring on a bases-loaded walk in the third and plating an unearned run in the sixth.Chris Okey (Clemson) launched a pinch-hit home run and Alex Bregman had two hits and a pair of RBIs but it wasn’t enough as the USA Baseball Collegiate National Team dropped its series-opening contest to Cuba, 4-3, in front of 10,500 rowdy fans at Victoria de Giron Stadium on Thursday.

“I thought tonight was a well-played ball game by two talented teams,” Team USA manager Dave Van Horn (Arkansas) said. “Cuba just pitched a little bit better than us today and took advantage of a couple of opportunities we presented to them. It was a really fun atmosphere out there this evening and we are looking forward to getting back out there again. Hopefully we can cut down on a few of the mistakes and even up the series tomorrow night.”

Cuba took advantage of a couple of miscues by Team USA to emerge with the victory, scoring on a bases-loaded walk in the third and plating an unearned run in the sixth, to claim the first contest in a five-game series after being swept in the United States last summer.

Starting pitcher Norge Ruiz gave Cuba six quality innings on the mound, striking out six while allowing just one run on two hits and three walks. Carlos Juan Viera picked up the save with a scoreless ninth.

Justin Garza (Cal State Fullerton) suffered the loss for Team USA, yielding a pair of runs on four hits while walking four in 2.2 innings. All four of his walks came in the third inning when Cuba used a bases-loaded free pass and an RBI single by Ramon Lunar to jump out to a 2-0 lead.

Team USA got one of those runs back in the top of the fourth when Bregman followed a one-out walk to DJ Stewart (Florida State) with an RBI double to the gap in left-center.

The score would remain 2-1 in favor of Cuba until the sixth when RBI singles by Roel Santos and Luis Yander la O. pushed the U.S. deficit to three runs.

The Red, White and Blue would fight back with single tallies in both the seventh and eighth innings on Okey’s leadoff longball and another run-scoring single by Bregman, respectively, but Cuba held them at bay just long enough before Viera left two runners stranded in the ninth to record the save.

Team USA and Cuba will square off in Matanzas once more at 7:15 p.m. on Friday before heading to Pinar Del Rio for the final three games of the series. UCLA right-hander James Kaprielian will square off against Cuban southpaw Julio Alfredo Martinez in game two.