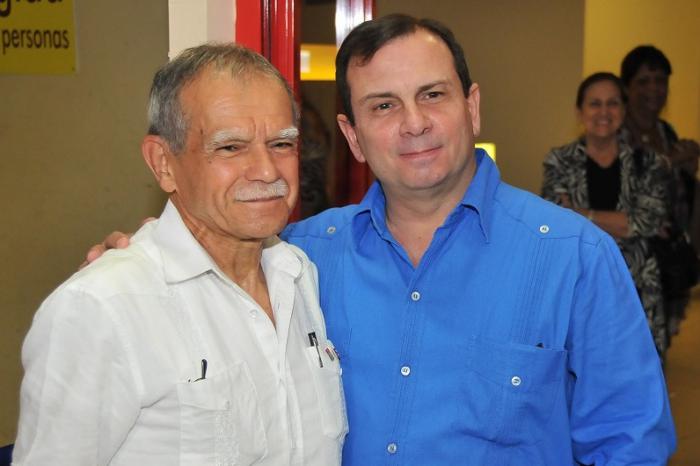 Nov 13 (Escambray) Happy to visit Cuba for the first time, whose leaders and people he thanked for their support for his release, the Puerto Rican independence leader Oscar López Rivera arrived in Havana this morning.

He was welcomed by Fernando González Llort, Hero of the Republic of Cuba and president of the Cuban Institute of Friendship with the Peoples (ICAP), with whom the Puerto Rican patriot shared a four-year cell in the Terre Haute prison in Indiana, United States.

In statements to the press, Lopez Rivera said he intends to enjoy as much time as possible with his brother Cuban people.

When referring to the situation in Puerto Rico, he recalled that it is a country colonized for more than 100 years that today suffers from the effects of hurricane Maria, while facing the lack of interest and support from the US government.

López Rivera will exchange during his visit to Cuba with the Five Cuban Heroes who served sentences in the United States, including Fernando, where in addition to the Order of Solidarity, conferred by the State Council, he will receive samples of affection and admiration of the authorities and the population.

Invited by ICAP, the independence leader will develop an extensive program of activities, which includes meetings with representatives of various sectors in various provinces, and the tribute to Commander in Chief Fidel Castro in the Santa Ifigenia cemetery, in Santiago de Cuba.

As part of the support for the case of López Rivera, during the more than three decades of imprisonment, Cuba promoted before the United Nations Decolonization Committee a resolution in which it requested recognition of the right to independence and self-determination of Puerto Rico, and demanded Lopez Rivera´s release and that of other freedom fighters imprisoned in the United States.

The project, supported by Bolivia, Venezuela, Ecuador and Nicaragua, was approved as a resolution by said committee in 2012, but the US ignored it.

Now, on a memorable day for relations of brotherhood between Cuba and Puerto Rico, the island receives this Puerto Rican patriot.