Posted on December 9, 2016 by Anthony Brenner 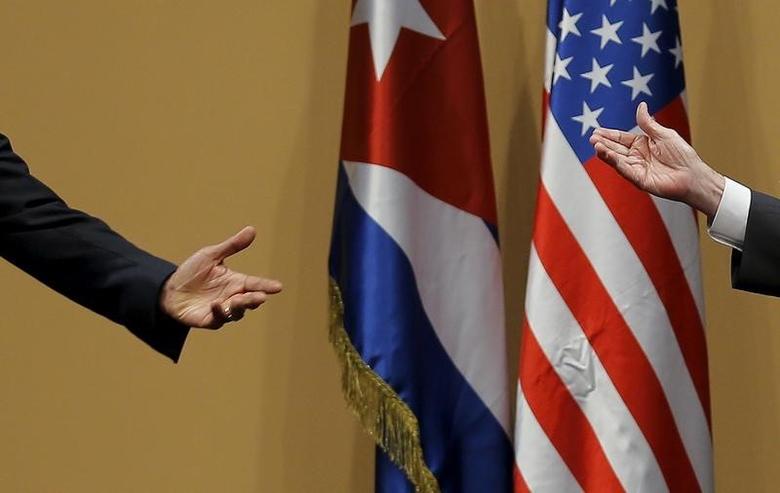 The hands of U.S. President Barack Obama and Cuban President Raul Castro are seen during a news conference as part of Obama’s three-day visit to Cuba, in Havana March 21, 2016. REUTERS/Carlos Barria

Cuba said on Wednesday it hoped to sign off on at least half a dozen agreements with the United States before businessman Donald Trump, who has threatened to derail detente between the former Cold War foes, becomes president on Jan. 20.

Cuban and U.S. officials held talks in Havana to discuss what more could be accomplished during President Barack Obama’s remaining weeks in office, agreeing to arrange more high-level visits and technical meetings.

The more Cuba and the United States deepen their detente, the more irreversible it will become, analysts said.

“At the moment we are negotiating 12 more (accords) with the aim to be able to conclude and sign a majority of them,” Josefina Vidal, the Cuban foreign ministry’s director of U.S. affairs, told a news conference.

The accords would be in areas such as seismology and meteorology, she said, adding that Cuba and the United States had already signed a dozen accords in the two years since they agreed to normalize relations, ending decades of hostility.

But some fear all that is now at stake, given Republican Trump has said he would seek to reverse the opening unless Communist-ruled Cuba gives the United States what he calls a “better deal”.

Vidal declined to comment on Trump’s statements but said she hoped his administration would recognize that the detente had the backing of most Cubans and Americans.

“Cuba would hope the new U.S. government takes into account the results we have achieved… that are backed by the majority of the Cuban population (and) U.S. citizens,” she said.

Cuba was willing to continue improving relations but “within the respect of the existing differences and without having to make any kind of concession to the principles in which Cuba firmly believes,” Vidal added.