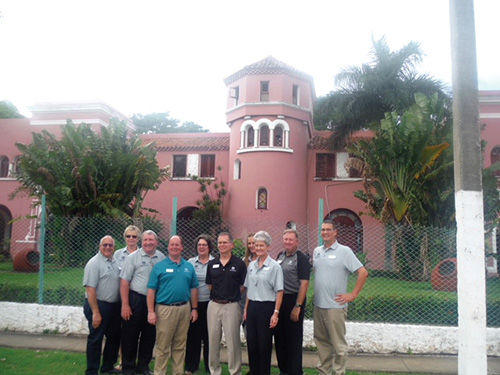 MILTON, PA — “Not what we expected” is a phrase used repeatedly by two executives with the Central Susquehanna Intermediate Unit (CSIU) when describing an educational tour of Cuba they participated in late last year.

Executive Director Dr. Kevin Singer and Chief Financial Officer Chuck Peterson participated in the trip through the Association of School Business Officials International (ASBO). Peterson is the 2018 president of that organization.

ASBO is a collaborative association working to provide members with professional growth and networking opportunities.

On their first day in the country, the CSIU executives said their group of 15 U.S. educational professionals met with Cuban education officials. The trip was designed to show the U.S. delegation how the Cuban education system works.

“The very first thing they told us was that family plays a critical role in education,” Singer said. “They went into the relationship of the family and the school. It’s not passive… I was not expecting to hear any of that.”

He said the Cuban government requires school schools to incorporate family values and involvement into the educational system.

“My impression of Fidel (Castro) prior to going (to Cuba) was a shoe-stomping, charismatic leader, a military leader,” Singer said. “The people we talked to had a huge reverence for him. They said ‘here’s what he did to support family values.’

“Those were things I was not expecting to hear.”

While Singer and Peterson were not expecting to hear of the Cuban people’s reverence for Fidel Castro, they were also surprised to learn of an initiative he launched just after becoming president.

According to Singer, Cuba had a 95 percent illiteracy rate prior to 1959.

“(Fidel Castro) decided the country could not survive with that much illiteracy,” Singer said. “He set a goal for Cuba to become 100 percent literate.”

Cuba launched the Literacy Education Program, which Singer said called for 100,000 volunteers to teach reading skills to their fellow countrymen and women. Two-hundred-eighty-thousand volunteers signed up to participate.

By 1961, Peterson said they were told Cuba had achieved a 96 percent literacy rate.

As part of their tour, the group Singer and Peterson were part of visited a museum dedicated to Cuban literacy.

“Everyone who went through the literacy program had to write a letter to Castro,” Singer said, adding that those letters are housed at the museum.

“The letters were talking about learning how to read… and what that meant to (the people),” Singer added, noting that they also paid homage to Fidel Castro.

“I’ve never heard of Castro in that light… as an inspirational leader,” he said.

When their group arrived in Cuba, the CSIU executives said they were assigned a tour guide — Arturo — who said they were free to speak to anyone in Cuba and ask any questions they wished.

“Early on, it would have been very easy to believe (the Cubans) were putting on a show for us,” Singer said.

However, in interacting with the Cuban people, the group concluded that was not the case.

“Even the government pitch was ‘we want you to come here.’”

Singer was surprised to learn from Arturo that Cuba considers itself a socialist country, rather than a communist one.

“Arturo said ‘we are friendly with communist countries because they send things to us,’” Singer added.

A U.S. embargo imposed on the country has affected Cuba, the CSIU executives said. Buildings in the country are dilapidated and many live in poverty.

When meeting with a school principal, Singer was at first shocked to learn the annual budget must include an accounting for how much cement they would need to use for such things as sidewalk repairs.

“I have never seen cement in a school budget,” he said.

Because of the embargo, Singer learned the country cannot receive cement from the U.S. Instead, it must import the item from China or Africa, making it very expensive.

“Cement is kind of a luxury item,” Singer noted.

He and Peterson also shared that Arturo had left his job as a university professor to become a government-paid tour guide.

As a professor, Singer said Arturo earned about $1,000 per year. He earns a little more as a tour guide, but reaps big rewards from the tips he receives from those he guides.

Singer and Peterson said tourism is a booming industry in Cuba, with multiple tourists from many nations visiting the island.

However, Singer said the U.S. is not one of the nations that many of Cuba’s tourists come from.

“The Trump administration has clamped down on tourism to Cuba,” Singer said.

The two were told that a lot of Canadian citizens travel to Cuba as the country has cheap airline rates to the island.

With an influx of tourists, Singer and Peterson said the Cuban people are embracing the tourism industry.

“One of the things people started to think of was ‘what can I do as a private business that the government will approve?’” Singer recounted. “One of the businesses is restaurants. The restaurants are located in people’s homes.”

The group Singer and Peterson were part of dined at several such restaurants, including one in which the meal was served in “The Obama Room.”

Singer said the room is named after the former U.S. president as Obama and his family once dined there while visiting Cuba.

“They loved Obama,” Singer said of the Cuban people. “He started to lift the embargo, which opened up tourism.”

Singer and Peterson were impressed with how important the arts are in Cuba, with live entertainment often performing at the restaurants they visited.

The importance of the arts are also stressed in the schools the group toured.

Peterson said Cuban students can attend school for free, all the way through college. The only requirement is that students must spend at least two years post college working in the field in which they majored.

According to Peterson, Cuba spends about 13 percent of its government budget on education.

In addition to noting how happy and welcoming the Cuban people were, Singer said the primary impression he has carried back with him to the United States is that although many people live in poverty, the parents are actively involved in their children’s education.

“The school is an integral part of the family and the community,” he said.

Eventually, Singer said he would like to be able to sponsor Cuban educators to tour U.S. schools. However, he said that would be very difficult at this time due to travel restrictions from Cuba imposed by the U.S. government.