Posted on September 27, 2017 by Anthony Brenner 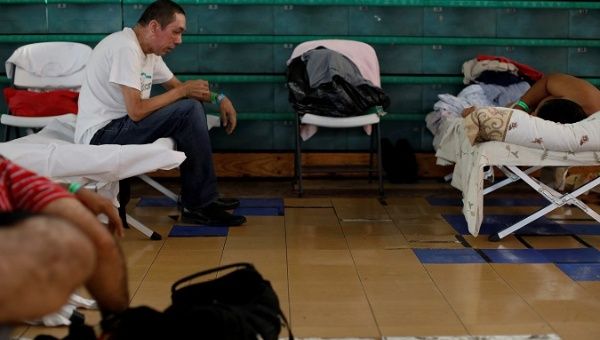 Ernesto Santaella (L) rests in one of the many shelters set up in the aftermath of Hurricane Maria in San Juan, Puerto Rico. | Photo: Reuters

The offers of support come as Trump’s administration continues to ramp up pressure against both leftist governments.

The governments of Cuba and Venezuela are offering relief assistance to Puerto Rico as it recovers from the devastating effects of Hurricane Maria.

Venezuelan President Nicolas Maduro promised to activate a “special plan of support and solidarity” for victims on the Caribbean island. Meanwhile, Cuban Foreign Minister Rogelio Sierra offered to send a team of 39 doctors “to help our brother people.”

The offers of support come as U.S. President Donald Trump’s administration continues to ramp up pressure against both leftist governments. The former reality TV star has threatened to bolster the illegal U.S. blockade against Cuba and has escalated sanctions against Venezuela.

“The situation here in Puerto Rico is dire,” said Case Harrity, a local Save the Children representative.

“This is a major disaster and recovery will take months, if not years. Families in Puerto Rico need more help, and they need it urgently.”

It wasn’t until five days after the hurricane hit Puerto Rico that Trump commented on the island’s destruction. Both Texas and Florida were in stable condition, he said, but Puerto Rico “which was already suffering from broken infrastructure & massive debt, is in deep trouble.”