HAVANA — The imposing, seven-story structure with darkened windows sits just across from the Malecon, or sea wall, central Havana’s communal hangout. It is unadorned, flying no flags, offering few signs that germinating inside are seeds of a better relationship between official enemies. 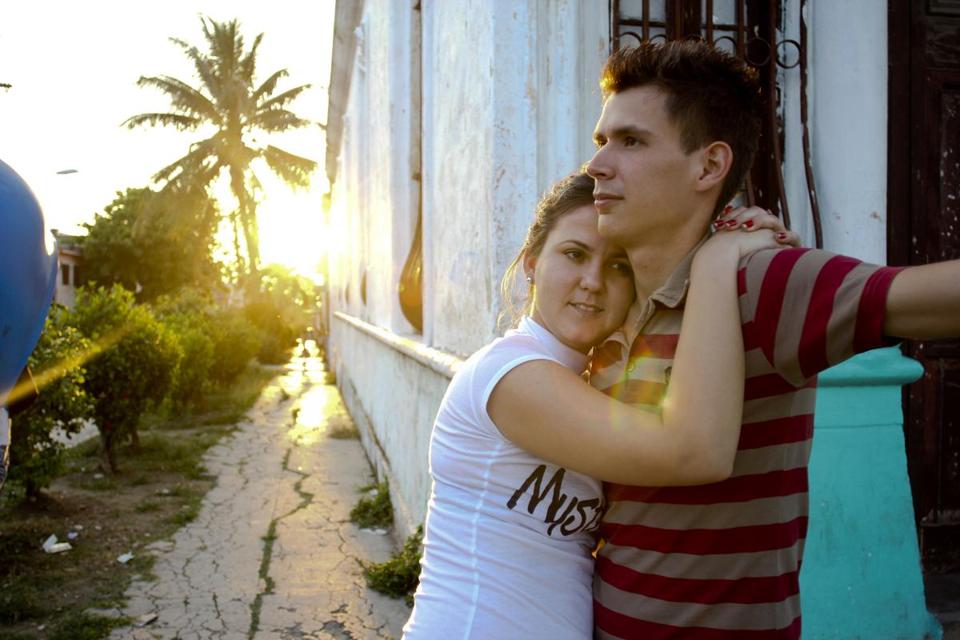 “Things are changing but they should have changed years ago,” says Darien Garcia Arco, 26, with his girlfriend, Lisandra. Photo by Hannah Berkeley Cohen for The Globe

The United States cut off relations and imposed a trade embargo with communist Cuba more than half a century ago. But at the so-called US Interests Section in Havana, 50 US diplomats and 300 locally hired Cubans are quietly working on a range of common challenges.

The two governments are cooperating to combat human trafficking, improve airline security, and conduct search and rescue operations. They are working on joint efforts to improve public health and guard against environmental degradation. And “working-level” discussions are under way to do more, officials say.

The Drug Enforcement Agency could soon be sending agents to work with Cuban counterparts to track South American cartels, and the United States has proposed reestablishing direct mail delivery between the countries.

The behind-the-scenes work continues despite the recent controversy over a covert US effort to provide Cubans access to a Twitter-like social network.

Another thorny disagreement is over the fate of Alan Gross, a US State Department contractor who has been jailed in Cuba for four years, accused of being a spy. Cuban officials insist they want something in return; namely, three Cubans convicted in the United States on charges that they were intelligence agents.

“There is a big over-arching political cleft. But we are doing a number of things that have been politically blessed by both sides,” said a senior US diplomat who works at the diplomatic post.

The diplomat — who requested anonymity to speak, in compliance with State Department rules — expressed frustration that interaction between the two governments at higher levels is still officially prohibited.

The Obama administration, under pressure from politically powerful Cuban-Americans in South Florida and their supporters in Congress, insists that relations can be restored only when Cubans win “fundamental human rights and the ability to freely determine their own political future.”

But a recent visit to this island just 90 miles from Florida, and interviews with Cuban and American officials, revealed a slow but unmistakable thaw on both sides of the Florida Straits. They are realistic about the snail’s pace of change, while describing pent-up demand for better economic opportunities.

Nowhere is that more evident than at the US Interests Section, housed in the former US Embassy that was completed just before the Cuban Revolution in 1959, when Fidel Castro, along with his brother Raul, took power.

Each day, up to 800 Cubans line up seeking various services such as licenses for cultural exchanges, passport services, and other travel documents. That compares with about 100 per day last year, according to US diplomats.

US residents are now the second largest group of foreign travelers to Cuba each year, behind Canada, including at least half a million Cuban-Americans last year, who are now allowed to freely travel here under relaxed rules instituted in 2009. Another 100,000 Americans visited as part of educational and cultural exchanges approved by the US State Department.

According to a new report by the Havana Consulting Group, more than 173,000 US residents visited the island just between January and March of this year.

Meanwhile, studies find that money and goods pumped directly into the Cuban economy by Cuban-Americans — as much as $5 billion in 2012 — now outstrip the country’s four major sectors, including tourism as well as nickel, pharmaceutical, and sugar exports. That is having a major impact on a population of just 11 million people, most of whom barely eke out an existence in the island’s centrally controlled economy.

Cuban officials, who agreed to speak to a reporter only if they were not named, denied the common view among Cubans that the government is fearful of renewed ties with its neighbor to the north.

“We can defend what we have. We are not afraid,” said a senior official at Cuba’s Ministry of Foreign Affairs. “We have spent 50 years preparing the people for anything.”

The gradual thaw in relations provides some hope for many average Cubans. The country’s economic anemia — the average Cuban earns roughly $17 a month — is evident in daily life, from a crumbling infrastructure that has seen little investment since the 1950s, to shortages of staples such as eggs and meat, which for many Cubans are still rationed.

Darien Garcia Arco, 26, an electrical engineer who works for the government, earns the equivalent of about $70 a month. That is more than most Cubans, he points out, allowing him to have his own apartment, a rarity for someone his age.

“There have been changes. Now you can buy and sell in a way that you couldn’t before,” Arco said at a small social gathering in a dilapidated high-rise (which, like most buildings, still has a Committee for the Defense of the Revolution post on its ground floor, a mainstay of Cuba’s surviving police state apparatus).

“Things are changing but they should have changed years ago,’’ Arco said. “They are still not being felt widely.”

The older generation, which appears most committed to the socialist model spearheaded by the Castro brothers, also openly expresses a desire for greater opportunity. Maria Cirules, who fought with some of the leading Marxists who took power in 1959 and is now in her 70s, recounted some of the hard-won achievements of Cuba’s socialist political system: Health care for all. Near-total literacy. No starvation.

“That is a conquest for us,” she proudly declared.

Yet when asked what her late comrade, socialist visionary Ernesto Che Guevara, might think of modern Cuba’s economic situation, she was just as adamant.

There have been a series of reforms instituted since Raul Castro took over as president in 2009 from his ailing brother, who ruled for nearly 50 years.

Dozens of private restaurants, known as casa particulares, have appeared in the past few years, usually located in private homes or apartments, an easily visible sign that the government is allowing more of a free-market economy to emerge. A few state enterprises have also been turned into cooperatives.

The Cuban government has recently welcomed some foreign investment, including a port project and industrial zone underway on the western part of the island that is financed by Brazilian investors. Also, the parliament is considering a broader foreign investment law.

Most striking to longtime observers was the announcement last year that Cubans, who have largely been prisoners in their own country, can apply to travel out of the country. There is also a small but vibrant blogosphere emerging on the government-controlled Internet, including some commentators who are openly critical of the government.

One US official who has had a unique viewpoint into the changes is Representative James P. McGovern, a Massachusetts Democrat who has long advocated for normalizing relations.

“It is difficult but it is not oppressive,” McGovern, visiting Cuba at the same time as a Globe reporter, said of the political atmosphere here. “It is not to minimize the human rights challenges, but there have been changes here that have resulted in more political space.”

McGovern, who has traveled here more than a dozen times since his first trip in 1979, nevertheless believes the Obama administration, acting independently, can do far more to encourage change here, and he has taken his case directly to Secretary of State John F. Kerry, his former Bay State congressional colleague.

“I firmly believe that now is the time to take more significant steps that address our relationship with Cuba,” he said.

Among the steps McGovern and his allies in Congress are advocating is permitting US firms to offer goods and services to the privately run businesses and cooperatives and increasing the number of Americans who can apply for a license to travel to Cuba for educational and cultural exchanges.

Another plea falls directly under Kerry’s purview: removing Cuba from the State Department’s list of state sponsors of terrorism, which would clear some of the legal impediments to greater diplomatic engagement. (“Nobody can explain to me why they are on the terrorist list,” McGovern says.)

The State Department says it has no plans to remove Cuba from the list. But a spokeswoman for the Bureau of Western Hemisphere Affairs said that such sanctions against Cuba are “only one aspect of US policy.”

“The administration has taken steps to improve conditions for Cuban citizens through initiatives aimed at increasing the flow of information, resources, and humanitarian relief,” said Angela M. Cervetti. “We will continue to think creatively about appropriate policy changes that will enhance the Cuban people’s access to human rights and fundamental freedoms, and their ability to freely determine their own future.”

She also said that Gross’s continued detention “impedes our ability to establish a more constructive relationship with Cuba on matters affecting both countries.”

For longtime Cuban officials like Gladys Rodriquez, there remains a deep sense that the road to normalization will require more struggle.

“I will admit that I still believe the day the United States will lift the blockade or embargo is far away,” said Rodriquez, an official at Cuba’s National Council of Heritage.

She has worked for more than a decade with Boston-based Finca Vagia Foundation to restore the Cuban legacy of American novelist Ernest Hemingway, a project McGovern helped launch and that, like the broader relationship, has suffered from some fits and start.

“But I do have the conviction that sooner or later, the process we are all waiting for shall take place and our two countries will have normal relations,” she said.