Cuba Under Media Attack for Sending Doctors, Not Bombs, to Help Covid-19 Victims

As coronavirus ravages the world, Cuba has exhibited disproportionate heroism, deploying medical personnel to at least 14 countries thus far to battle the pandemic—including to Italy, which has been particularly devastated. The response is in keeping with Cuba’s decades-long tradition of “doctors, not bombs,” which has seen the tiny island nation dispatch tens of thousands of medics across the globe to combat everything from Ebola to more mundane diseases like malaria and tuberculosis. The Cuban approach stands in marked contrast to the modus operandi of the global superpower and Cuba’s primary antagonist, the United States, a country with an established predilection for bombing rather than saving people.

Cuba’s coronavirus performance is a welcome bit of uplifting news in an otherwise mostly dismal international panorama. Lest anyone start feeling too inspired by the idea of humanity, however, sectors of the US corporate media are dutifully standing by to burst the bubble. 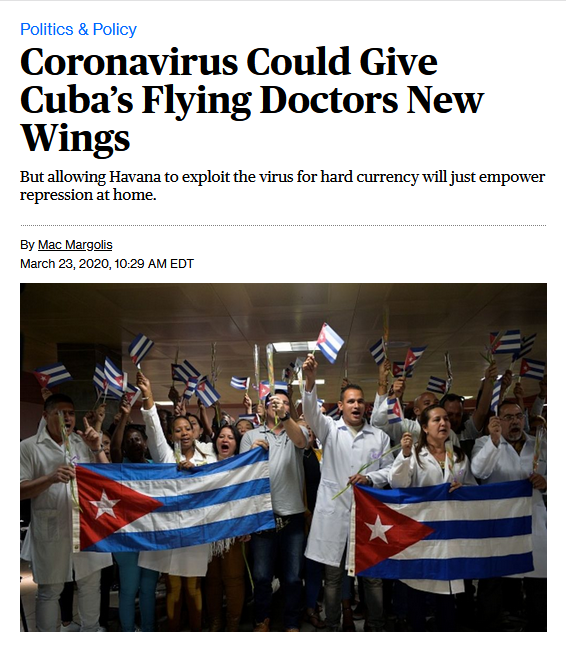 A March Bloomberg opinion article (3/23/20) headlined “Coronavirus Could Give Cuba’s Flying Doctors New Wings,” for example, came equipped with the following caveat in the subheadline: “But allowing Havana to exploit the virus for hard currency will just empower repression at home.” The text of the article, by Mac Margolis, contained few easily detectable illustrations of domestic “repression,” aside from allegedly insufficient Cuban government efforts on behalf of a “consumer economy” and “emerging private sector”—which certainly sounds less repressive than, I don’t know, the US police habit of fatally shooting black people.

Margolis also stressed that, in Cuba, Covid-19 is “anything but an equal opportunity affliction,” and that “compañeros with connections or access to dollars have a far better shot at securing medication and loading up on groceries during a lockdown.” Never mind that Cuban compañeros would have better access to basic necessities in general had the island not been at the mercy of a sadistic US embargo for the past 60 years, or that severe socioeconomic inequality is overall a defining hallmark of US capitalism—as illustrated by reports that low-income communities of color in the States are being hardest hit by the coronavirus.

The Bloomberg article is accompanied by a photograph of Cuban doctors wielding Cuban flags, with the caption: “Nice flags, but how about a bigger paycheck?” And while bigger paychecks are obviously less imperative in societies—like Cuba’s—where the essentials of survival are provided free of charge, a more pertinent question in the time of global pandemic might be how the US spends trillions of dollars on wars and still generates news reports like “Uninsured Americans Could Be Facing Nearly $75,000 in Medical Bills if Hospitalized for Coronavirus” (CNBC, 4/1/20). 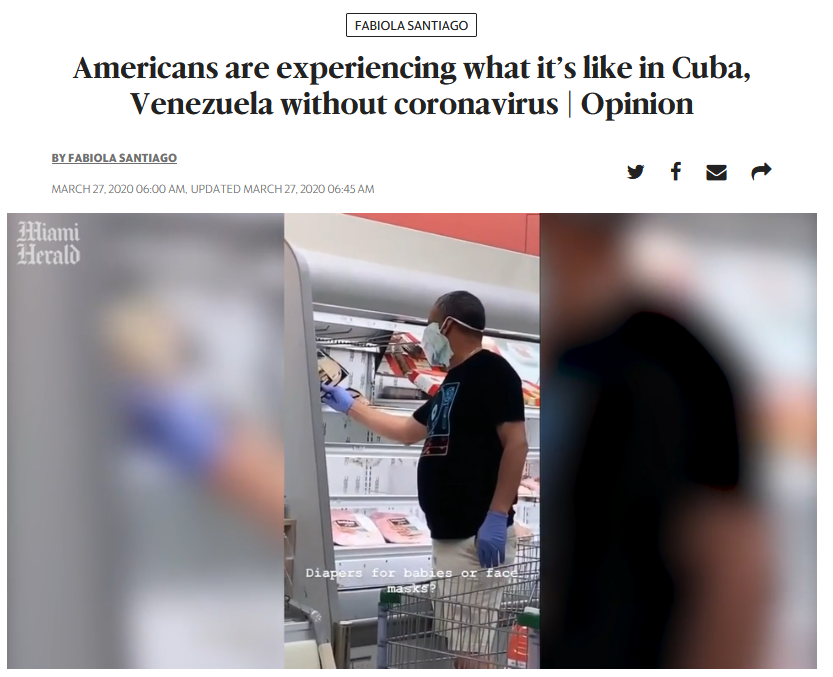 The Miami Herald‘s Fabiola Santiago (3/27/20) suggests that being confined to one’s home 24 hours a day is what everyday life in Cuba and Venezuela is like.

Plenty of other media outlets have meanwhile exploited the current pandemic to disseminate frank anti-Cuban propaganda. Over at the Miami Herald (3/27/20), Cuban exile Fabiola Santiago informs us that “Americans, in the midst of food and supply shortages and limitations on personal freedoms, are getting a taste of what it’s like in Cuba and Venezuela—without coronavirus.” Santiago seems to be under the misapprehension that US citizens ordinarily never face food shortages or limits on freedom–but at least now she won’t be alone in her “only-in-Miami form of PTSD, the growing up in Cuba kind.”

Additional moaning is on display at PanAm Post (3/30/20), where Mamela Fiallo Flor—cofounder of the Cuban Libertarian Party—suggests that calling Covid-19 the “Chinese virus” serves to “dissociate…it from the main culprit: the Communist Party.” The upshot: We should call it the “Communist virus” and recognize its nefarious impact on Cuba, as well, which “advertises itself as a medical power when, in fact, the shortage of hospital staff on the island is a direct consequence of the use of doctors for propaganda purposes.”

Certain mainstream publications have evidently not yet gotten the memo, as a recent Reuters article (3/22/20) emphasizes that Cuba “has one of the highest ratios worldwide of physicians per capita even when excluding those doctors abroad, and its medical brigades for disaster relief continue to earn Havana goodwill worldwide.” The piece was published on the New York Times website (though no longer available there), showing that even the decidedly anti-progressive US newspaper of record, it seems, is susceptible to the Communist virus. 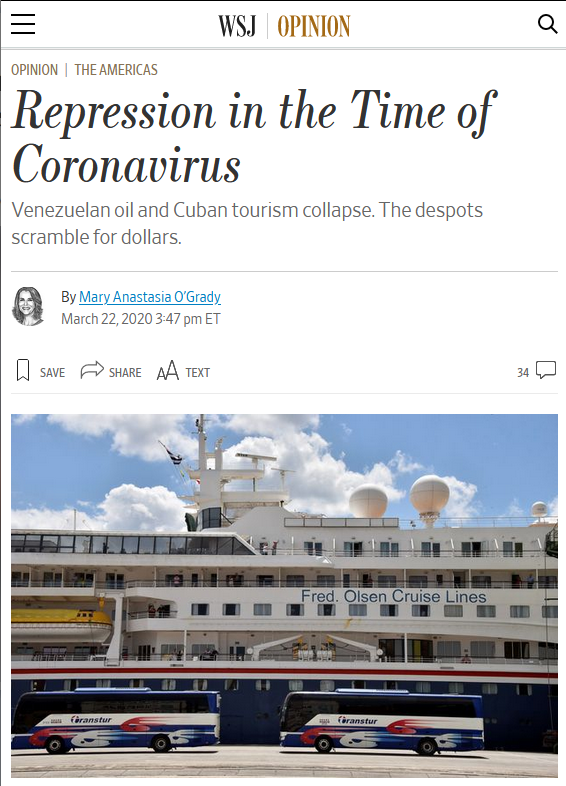 The Wall Street Journal‘s Mary Anastasia O’Grady (3/22/20) mocks Cuba for “claiming that Havana is stepping up to help the world in a time of crisis.”

The Wall Street Journal (3/22/20), on the other hand, remains true to principle. An intervention titled “Repression in the Time of Coronavirus”—by Mary Anastasia O’Grady, Journal columnist and editorial board member—begins with a typical jab at the oh-so-radical Democrats in the US:

Given the credibility that President Obama and Vice President Joe Biden lent to Cuban propaganda while they were in office, I half-expected to see them enjoying spring break in [Cuba’s] Varadero Beach last week.

This is the same O’Grady who once insinuated (Wall Street Journal, 11/1/09) that the very Obama administration that backed the 2009 right-wing coup against Honduras’ Manuel Zelaya was itself too pro-left for comfort, and that the US ambassador to Honduras should therefore be relocated to a diplomatic post in Cuba.

O’Grady (5/29/10) also swooned over “The Man Who Saved Colombia” from narco-trafficking and other evils—i.e., former President Álvaro Uribe, the man who not only appeared on a US Defense Intelligence Agency list of “the more important Colombian narco-traffickers contracted by the Colombian narcotic cartels,” but also presided over the notorious “false positives” scandal, which saw the Colombian army massacre some 10,000 civilians between 2002-10, passing them off as guerrilla combatants in order to justify continued US aid.

Another Latin American “savior” endorsed by O’Grady (10/28/18) was Brazil’s President Jair Bolsonaro, whom she placed “on the side of reform”—representing an “opportunity to advance liberty and prosperity”—despite being “labeled a racist, a misogynist, a homophobe, a fascist, an advocate of torture and an aspiring dictator.” (O’Grady presents this list as though it’s self-evidently absurd, but it’s actually a pretty good summary of who Bolsonaro is; see FAIR.org, 10/31/18.)

With so many heroes in our midst, who needs Cuba and its coronavirus-era claims that—as O’Grady scoffed—“it makes magic in its pharmaceutical labs”? O’Grady’s derision was not shared by Yale University Press, which on March 12 published a blog post by University of Glasgow lecturer and author Helen Yaffe, who discusses Cuba’s historically impressive advances in biotechnology, “despite the US blockade obstructing access to technologies, equipment, materials, finance and even knowledge exchange.”

Noting that the Cuban anti-viral drug Interferon Alpha 2b was among those initially chosen to contain coronavirus in China, Yaffe recalls that interferon was instrumental in addressing Cuba’s dengue epidemic of 1981, which “affected 340,000 Cubans with 11,000 new cases diagnosed every day at its peak.” Cuba, Yaffe writes, “suspected the CIA of releasing the virus”—and, while the US naturally denies such allegations, pretty much anything is possible from the country that tried to kill Fidel Castro in no fewer than 638 ways, including via brightly painted exploding mollusks.

In her anti-Cuban coronavirus “repression” piece, O’Grady noted that Cuba has “already been denounced for treating its medical workers like chattel when it sends them abroad to earn money for the regime and indoctrinate populations.” Anyone requiring a footnote on this claim need look no further than O’Grady’s own article (11/9/14), headlined “Cuba’s Slave Trade in Doctors”—which also argued that “making medical professionals an export product is provoking a doctor shortage in Cuba [and] exacerbating widespread privation in healthcare.” (Take that, New York Times!)

In her 2014 exposé, O’Grady cast the Cuban doctor “slave trade” as “big business, which if it weren’t being carried out by gangster Marxists would surely offend journalists”—as if  US journalists who mainly work for advertiser-supported outlets owned by multinational corporations have a natural affinity for “gangster Marxists.”

Fast forward six years to O’Grady’s rant against Cuba’s coronavirus “efforts to use the pandemic…to create the illusion that it specializes in advanced medical care”—which, according to her professional assessment, is “a sick joke.”

But as the US continues to thwart effective and affordable medical care for humans at home and abroad—and as neoliberalism and its media acolytes continue to dismantle all forms of human solidarity—there are loads of sick jokes to go around.

This entry was posted in Healthcare, The Blockade?. Bookmark the permalink.