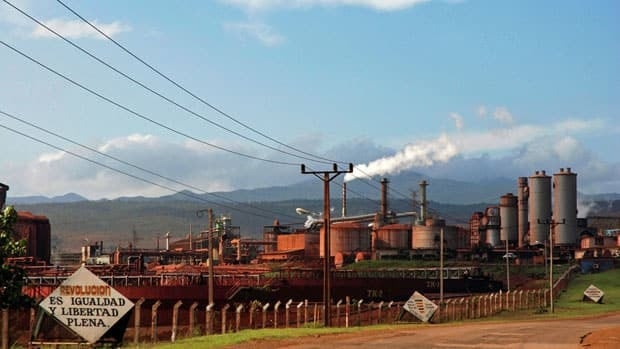 Feb 3 (Reuters) – Cuba will reduce production at one of its two nickel plants this year so it can carry out maintenance and capital improvements to make the plant competitive at low international prices.

A report on the evening government newscast on Sunday said the Ernesto Che Guevara processing facility in eastern Holguin province would be given a major overhaul.

The state-owned plant, built with Soviet technology and opened in 1986, has a capacity of about 30,000 tonnes of unrefined nickel plus cobalt a year at a cost of more than $12,000 a tonne.

Spot nickel prices on the London Metals Exchange opened at $13,695 a tonne on Monday.

The broadcast quoted the plant’s head of maintenance as saying it would be the biggest overhaul in the plant’s 28-year history and that workers face the challenge of producing 14,700 tonnes of unrefined nickel plus cobalt while it is taking place.

“2014 is a very complicated year for the Cuban economy … and the world economy and the cost of production has to be reduced,” the maintenance manager was quoted as saying.

Cubaniquel and Sherritt are also partners in a Canadian refinery to which output from the Pedro Soto Alba plant is shipped. After refining, the product is marketed by yet another joint venture.

China and Europe also purchase Cuban nickel products, which are the country’s most important export and one of its top foreign exchange earners after technical services and tourism.

Nickel is essential in the production of stainless steel and other corrosion-resistant alloys. Cobalt is critical in production of super alloys used for such products as aircraft engines.

Cuban nickel is considered to be Class II, with an average 90 percent nickel content.

Cuba’s National Minerals Resource Center says Holguin province accounts for more than 30 percent of the world’s known nickel reserves, with lesser reserves in other parts of the country.