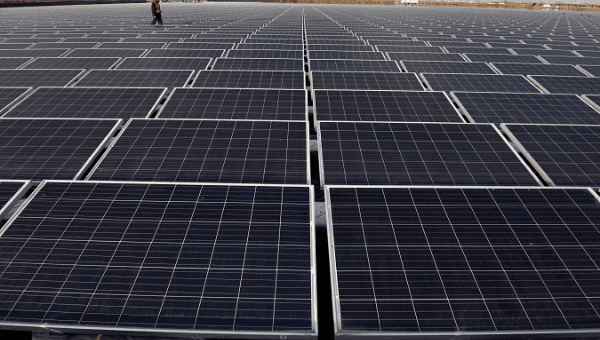 A worker examines a vast field of solar panels in China, in a scene that may some day be extended across Cuba. | Photo: Reuters

The Cuban government aims at producing 24 percent of the country’s electricity from renewable sources by 2030.

Dec 22 (teleSur) In collaboration with China’s Ministry of Commerce, the province of Cienfuegos in Cuba will soon increase its solar energy generation capacity to 16 megawatts per hour.

Yaguaramas photovoltaic park, donated by the Chinese government, is designed to produce five megawatts per hour during peak consumption hours.

By the end of the year, Chinese and Cuban technicians will synchronize the Yaguaramas park in the province of Cienfuegos to the National Electrical System.

In the southern province of Sancti Spiritus, a park with a capacity of 4.4 megawatts per hour was hooked up to the national grid on Thursday.

According to the investment director of the National Electrical Union in Sancti Spiritus, Raydel Diaz, the annual generation of 6,600 megawatts per hour represents savings of 716,00 tons of fuel and will eliminate the emission of 5,600 tons of carbon dioxide.

These two plants bring the island closer to the Cuban government’s plan to generate 24 percent of the country’s electricity from renewable sources by 2030.

Until 2012, solar energy installations accounted for less than three megawatts per hour and were mostly placed in mountainous rural areas unreachable by the national grid. Cuba now has 34 photovoltaic parks producing renewable energy.