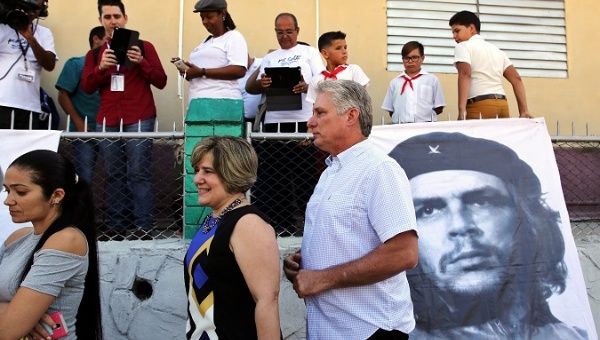 Cuba’s First Vice-President Miguel Diaz-Canel and his wife stand in line before he casts his vote during an election, in Santa Clara Cuba March 11, 2018. | Photo: Reuters

Cuba is bringing forward the start of the national assembly session where a new president will be selected to succeed Raul Castro.

April 16 (teleSUR) Cuba is bringing forward the start of its national assembly session where a new president will be elected to succeed Raul Castro, Cuban state-run Radio Rebelde said Monday. The new assembly, selected in a March vote, had originally been set to meet Thursday but will now start its “constitutive session” at 9 a.m. local time Wednesday, April 18.

“The State Council of the Republic of Cuba, making use of its conferred faculties, agreed to begin the Constituent Session of the 9th Legislature of the People’s Power National Assembly Wednesday April 18, 2018, at 9 a.m. in the Convention’s Palace in Havana.

The decision was made to facilitate the development of the steps that a session of such importance requires,” Radio Rebelde said on its website. The report doesn’t specify if the session will last only one day or if it will extend until Thursday.

The 86-year-old Raul Castro said he will step down as president at the next assembly session, after completing two successive five-year mandates.

Cuba’s ruling Communist Party has yet to name any formal candidate, but several party offcials are seen as potential runners for the presidency. current First Vice-President Miguel Diaz-Canel Bermudez, 57, is seen as a likely candidate.

Diaz-Canel would be the first president born after the 1959 revolution that ousted dictator Fulgencio Batista.

Other possibilities include Jose Ramon Machado Ventura, the party’s second secretary, who fought with guerrillas in the Sierra Maestro during the Cuban Revolution; and Ramiro Valdes, another former guerrilla who currently serves as vice-president of the State Council and Council of Ministers.

Cuba’s 168 Municipal Assemblies of People’s Power have held extraordinary sessions across the island to approve candidate selection for provincial delegates, according to Granma.

Castro, who was formally elected to the presidency 10 years ago after the end of Fidel Castro’s term in 2008, will remain head of the Cuban Communist Party until the next congress in 2021.