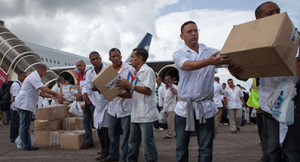 CUBA STANDARD — Reviving a regional integration initiative that has lost steam since the death of Hugo Chávez and Venezuela’s economic crisis, Cuba will host a meeting of ALBA bloc leaders in Havana to coordinate efforts to fight Ebola.

The summit, according to official daily Granma, will be held Oct. 20 in Havana, to coordinate Ebola-fighting activities in West Africa and prevention in Latin America and the Caribbean.

“With the objective of coordinating regional cooperation for the prevention of and confrontation with Ebola, an extraordinary summit of the Bolivarian Alliance (ALBA) will be held in Havana,” the short announcement said, adding that ALBA heads of state and government and other high-ranking officials of member nations will attend.

The meeting comes ahead of the 10th anniversary summit of ALBA, to be held Dec. 14 in Havana.

Cuba is apparently nudging its partners to be more proactive in West Africa.

An announcement published on the official ALBA website on the same day only mentions prevention. In a speech in Caracas, Venezuelan President Nicolas Maduro said he started the initiative, and that the summit may be held in Caracas or Havana.

“We ALBA countries have the most protected and powerful healthcare systems in Latin America,” Maduro said during a local healthcare event at the Teatro Nacional in Caracas. “We will have a special meeting I am proposing: Call, no matter whether here in Caracas or Havana, but immediately, to coordinate all knowledge, work protocols, and that within ALBA together we protect each other.”

In a second announcement published on the ALBA site Wednesday, Venezuelan Health Minister Nancy Pérez says the summit will be held in Havana, but only mentions prevention, not coordination of initiatives in West Africa.

Cuba has received high praise even in the United States for sending 463 doctors and nurses to Sierra Leone and Liberia to battle Ebola. Thousands more Cuban medics have volunteered, according to official media.

Cuba hasn’t said who pays for the initiative in West Africa; in the past, Venezuela has funded Cuba-led health initiatives in third countries. In the summit announcement, Maduro only said Venezuela has set aside sufficient funding for Ebola prevention in Venezuela.

In an interview with the Associated Press, a Cuban health official said the Cuban medics in Africa were paid ordinary salaries by the Cuban government, while extra expenses such as the costs of lodging and transportation were paid by the WHO.

Cuba and ALBA are responding to the call of the UN Secretary General to unite international efforts. According to The Guardian, the UN’s World Health Organization (WHO) believes just Sierra Leone will need around 10,000 healthcare workers. NGO Médecins sans Frontières, which has led efforts on the ground from the beginning, has some 250 staff on the ground. The second-largest government deployment of medical personnel is from the African Union, which dispatched some 100 health workers.

The United States government has agreed to spend $400 million on building at least a dozen 100-bed field hospitals, using some 4,000 soldiers, and has deployed 65 health officials to Liberia.

In a column titled “the hour of duty” published Oct. 18 in official daily Granma, Fidel Castro advocates cooperation “with North American personnel in this task.”

Japan has pledged $40 million, India $13 million, and China $5 million, plus a Chinese-built and staffed mobile clinic in Sierra Leone.

Even so, new facilities will lack the health workers needed to staff them.

Jorge Pérez, director of Cuba’s Pedro Kouri tropical medicine institute, told the Associated Press he expects the ALBA meeting to result in pledges of financial and human resources for the effort in Africa. He said that “as a scientist,” he expects “the countries in attendance join the international effort against Ebola, for the protection not just of their countries but also to see how they can help those countries experiencing such difficult situations.” He added that if there was money, Cuba could send more doctors.