Cuba suspends US consular services as bank pulls out 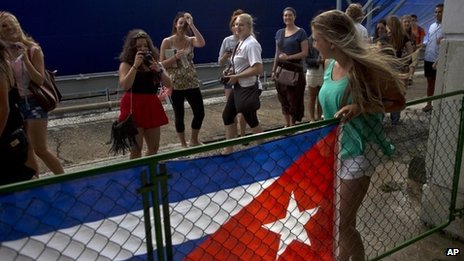 US travellers were expected to spend some $2bn (£1.2bn) in Cuba this year

The Cuban government says it has suspended consular services in the United States after an American bank decided to withdraw its facilities.

Cuba says it will not be able to renew passports and process visas unless it finds an alternative to the M&T bank.

The bank said its decision was taken for business reasons.

The move is likely to prevent tens of thousands of people travelling from the US to Cuba every month and could have a big impact on the economy there.

The US broke off diplomatic relations with the communist-run island in 1961 and imposed an economic embargo a year later.

In the absence of bilateral contacts, consular services have been handled by the Cuban Interests Section in Washington.

In a statement, the Cuban government blames the trade embargo for its failure to find a new bank “in spite of huge efforts made”.

The M&T bank announced last year that it would stop accepting deposits from 17 February, which is a public holiday in the US.

“The section regrets any inconvenience this situation may cause,” read the statement.

It says it will only be able to handle “humanitarian cases”.

More than 40,000 people on average travel to Cuba from the US every month, most of them Cuban-Americans, according to the Miami-based Havana Consulting Group.

Americans who do not have Cuban nationality are also allowed to travel if they are taking part in cultural exchange programmes.

The suspension of consular services comes amid a recent slight thaw in relations, says the BBC’s Sarah Rainsford.

Cuba and the US also announced the resumption of official talks on immigration and postal services between the two countries.

On Thursday, Cuban Foreign Minister Bruno Rodriguez said President Obama should proceed with a similar gesture and follow the example of the EU.