Cuba Shows at UN Application of US Blockade

Posted on October 8, 2017 by Anthony Brenner 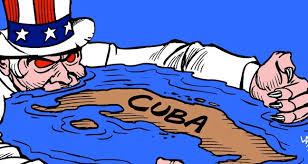 United Nations, Oct 6 (Prensa Latina) Cuba has demonstrated with concrete cases today the application of the U.S. economic, commercial and financial blockade against it, and the extraterritorial scope of the unilateral measures that comprise it.

The Cuban Permanent Mission to the UN circulated a press release with some of the most recent actions of the siege imposed during more than 55 years, when the world community is ready to reject it on November 1, for the twenty-six consecutive occasion since 1992, in the General Assembly.

According to the document, last April, HSBC Bank Canada, a branch of the British banking group HSBC Bank, refused to accept a transaction from Reuven International to the Cuban Consulate in Toronto, even though it was made in Canadian dollars.

In January, the Office of Foreign Assets Control (OFAC) of the Treasury Department imposed a fine of more than $500.000 million USD on the Canadian bank Toronto-Dominion Bank and two of its branches for processing between 2007 and 2011 about 30 transactions related to Cuba.

It also refers to last year’s events, such as the rejection of the U.S. company Amazon.com in the United Kingdom to receive orders from the Cuban embassy in London and the cancellation by Banco Santander of the services of Point of Sale Terminals to the Consulate General of the island in Seville, Spain.

The economic, commercial and financial blockade exists and is strictly enforced by U.S. agencies, including its extraterritorial dimension, which affects third countries, insisted the Cuban mission here.