Posted on September 28, 2014 by Anthony Brenner 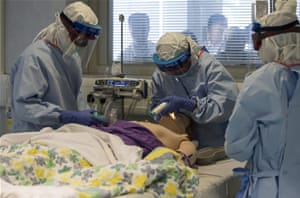 Cuba says it will send nearly 300 more doctors and nurses to West Africa to help fight the Ebola epidemic.

The Cubans will work in Sierra Leone, Guinea and Liberia, Regla Angulo, head of the Cuban medical relief agency, said in a statement on Friday.

The announcement means that up to 461 Cuban medical personnel would have been sent to help address the epidemic spreading across West Africa.

Angulo said the staff were currently undergoing intense training ahead of their deployment, working in a mock field hospital of the kind they expected to find in the region.

Cuba’s decision comes as health experts from 16 European countries urged their governments to massively scale up manpower and resources to fight the Ebola epidemic, now threatening “the entire world”.

“After months of inaction and neglect from the international community, the Ebola epidemic in West Africa has now spiralled utterly out of control,” said their open letter.

“Today, the virus is a threat not only to the countries where the outbreak has overwhelmed the capacity of national health systems, but also to the entire world.

“We urge our governments to mobilise all possible resources to assist West Africa in dealing with this horrific epidemic.”

On Thursday. US President Barack Obama said the global community had not done enough to respond to the crisis.

“There is still a significant gap between where we are and where we need to be,” Obama said on Thursday while addressing a high-level UN meeting on Ebola.

Chan said the virus was “still running ahead, jumping over everything we put in place to slow it down”.

The American government has dispatched 3,000 US troops to Liberia to set up facilities and form training teams to help treat patients.

The deadliest Ebola epidemic has infected more than 6,200 people in west Africa and killed nearly half of them since late last year, according to the World Health Organisation (WHO).