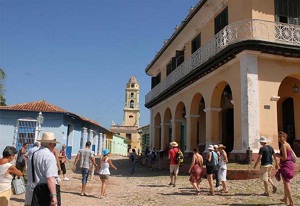 On November 10, Cuba’s National Office for Statistics and Information (ONEI) reported tourist revenue amounting to over 1.2 billion dollars in the first half of 2016, a 15% increase as compared to the same period last year.

According to the ONEI the figure only includes revenue from institutions affiliated with the Ministry of tourism, that is to say, excluding private businesses.

Canada continues to be Cuba’s top emissary market of tourists, with 77,678 travelers from that nation visiting the island during the first half of the year.

In second place is the Cuban community living abroad (187,073) and third, U.S. citizens (136,913), although people from that nation are prohibited from traveling to the island for tourist purposes given blockade restrictions maintained by the government of President Barack Obama.

Other important markets include Germany, France, Italy, the UK, Mexico, Argentina and Spain, according to the report.
In geographic terms the majority of visitors to the island come from the Americas, although travelers from Europe, the Middle East and Pacific also constitute an important number, according to ONEI figures.

The majority of visitors travel to Cuba for leisure, recreation and vacation purposes, according to the report, which also highlighted other motives such as businesses, personal reasons, events and health.