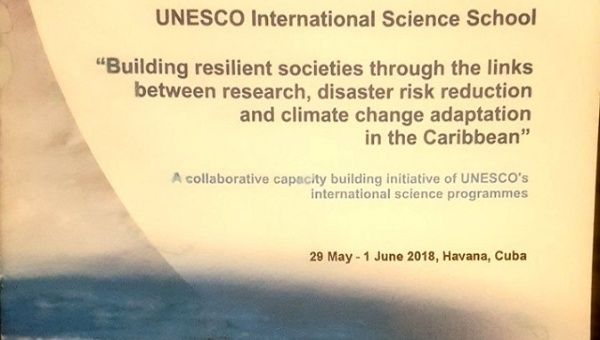 Havana’s Unesco International Science School was held to “provide a space for collective learning in relation to environmental adaptation.”

“It is impossible to advance in the adoption of adequate measures to make out societies more resilient to climate change without the support of science,” Science Minister Elba Rosa Perez said.

She emphasized Cuba’s will to cooperate and share scientific knowledge with its Caribbean neighbors and other countries in order to create the kind of international scientific cooperation necessary to tackle the problem.

The Caribbean, she said, faces among the highest risks from climate change of any region in the world, and so it is essential that scientific efforts are aware of the imminent risk faced and the necessity to work hard to achieve both mitigation and adaptation.

The remarks were made at the International Science School of the United Nations in Havana, a project of the United Nations Educational, Scientific and Cultural Organization (Unesco). It’s a joint effort by Unesco and the Ministry of Science, Technology and Environment of the Republic of Cuba.

Havana’s International Science School was held to “provide a space for collective learning in relation to environmental adaptation in the Caribbean,” according to Unesco.

“This capacity-building event is conceived as a knowledge-brokering exercise that will bring together academics, public officials and representatives from civil society, prioritizing young participants and women.”