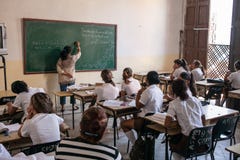 As Cuba slowly opens up its economy to the rest of the world, more and more Cubans are learning English. The Cuban government has made proficiency in English a requirement for all high school and university students. As Will Grant reports from Havana, that approach differs from the Cold War, when Russian was the preferred foreign language. At the annual Havana Jazz Festival, the audience members, much like the music, were a mix of international and Cuban. Sitting on plastic chairs at the open-air venue, visitors from the United States, Europe and China mingled with local jazz aficionados. On stage, a saxophonist who lives in Denmark was reunited with some old Cuban friends. At such an international event, the common language is generally English. Many Cubans are already learning the language themselves, and if not, they are trying to make sure their children are. ‘Nyet’ to Russian Morning assembly at Jesus Suarez Gayol Secondary School on the outskirts of Havana begins with the school’s anthem. Image caption Secondary school pupils are expected to reach a certain standard in English The school is named after one of the guerrillas who fought alongside Ernesto “Che” Guevara but these teenagers are growing up in an increasingly different Cuba to the one Jesus Suarez did. For a start, a certain proficiency in English is now a requirement for all secondary school children and university graduates. During the Cold War, students could choose between learning English and Russian but Cuba’s educational authorities told the BBC…more detail