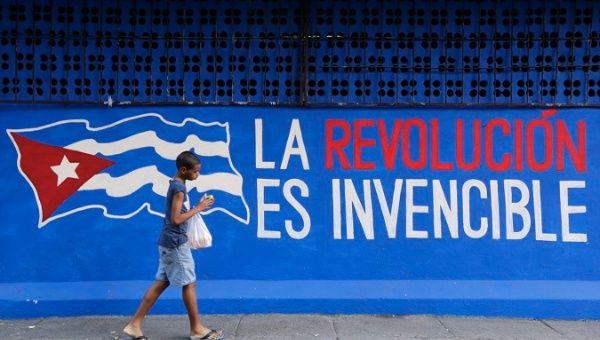 Feb 14 (teleSUR) Cuban Vice Minister of Foreign Affairs Rogelio Sierra has denounced statements made by Organization of American States, OAS, Secretary General Luis Almagro against the island’s electoral process, arguing he has “no credibility, morality or ethics to judge what the government and the people of Cuba does.”

“We categorically reject the declarations by the Secretary General of the OAS for being interventionist; Cuba will continue on its own path,” Sierra said during a press conference Tuesday.

On Saturday, during with a meeting with anti-government Cubans in Miami, Almagro claimed “we cannot accept a non-democratic succession in Cuba,” insisting the international community should not accept “dictators” in the upcoming Summit of the Americas.

This March, the Cuban people will elect over 600 new members of the National Assembly, which chooses the island’s president. According to Sierra, Almagro is “supporting the campaigns and action of the counter-revolution and its allies” with his comments.

In his statement, Sierra also pointed to Almagro’s complicit silence after U.S. Secretary of State Rex Tillerson openly expressed his support for a military coup in Venezuela on the eve of his Latin America tour.

However, Almagro’s silence is due to his support for regime change in Venezuela. During the same Miami meeting, Almagro referred to Venezuelan President Nicolas Maduro as a “dictator” and argued that to confront Maduro “first, we must confront the Cuban regime.” He also said Cubans living inside and outside of the island are “responsible for stopping the regime.”

In an interview with CNN Español, Almagro attacked the Venezuelan presidential elections scheduled for this April, saying “we already know, not because we are seers, that Maduro is going to win.”

Sierra concluded his rebuke assuring that “no one will be able to crush Cuba, even if the submissive and subservient, like the OAS Secretary General, dream with it.”