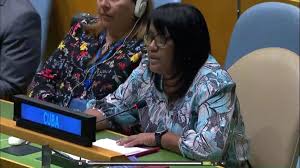 United Nations, Oct 15 (Prensa Latina) Cuba’s permanent representative to the UN, Anayansi Rodriguez, denounced on Monday the increasing politicization in the debate on human rights, particularly against countries of the South.

By intervening in the interactive dialogue with the UN High Commissioner for Human Rights, Michele Bachelet, Rodriguez said that such a trend violates the principles of objectivity, non-selectivity and impartiality, advocated by the UN.

The ambassador presented as the most recent example the event against Cuba that the United States Government intends to hold tomorrow in the room of the Economic and Social Council (ECOSOC), one of the main bodies of the UN.

Rodriguez argued that such an intention, using the name and space of the United Nations to attack one of its member states, is a clear violation of the purposes and principles of the UN Charter, and of the rules of this organization for holding meetings.

The ambassador – who asked the United Nations secretariat not to allow a manipulation of human rights against one of its member states, – stressed that the U.S. government lacks any moral authority to judge Cuba, when its current administration promotes an agenda of supremacist, racist and xenophobic ideas.

Just the day before, the Cuban mission to the UN rejected and condemned in energetic terms an anti-Cuban event organized by the United States Government at the United Nations, and asked the secretariat to cancel it.