Cuba reiterates commitment to cooperate with others in struggle against AIDS 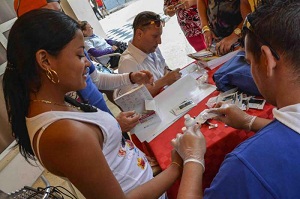 Yesterday June 9 in the UN General Assembly, Cuba reiterated its willingness to cooperate with other countries to combat the HIV/AIDS epidemic, and promote prevention, while advocating for the universal human right to health care and its non-commercial development, as necessary to reach the goal of eradication of the disease by 2030.

During the first three days of a high level meeting on the issue, Minister of Public Health, and Political Bureau member, Roberto Morales Ojeda, stated that the country is more than willing to help others, to share Cuba’s experience and accomplishments.

He renewed Cuba’s commitment to supporting worldwide, regional, and national responses to HIV/AIDS, stating that only integration, solidarity and cooperation can produce sustainable results, and confront common challenges in a globalized, unequal world.

“Health must take priority over any other material, technological or intellectual property consideration (…). It is not acceptable that cost or other selfish considerations limit universal access to treatment for persons with HIV/AIDS,” he emphasized.

Morales stated the country’s position regarding the adoption of a UN resolution committing UN member countries to undertake efforts to eliminate the disease by 2030, saying that Cuba joins the consensus in favor of such a document, but notes that concerns about persistent problems and challenges are not reflected with adequate clarity or emphasis in the draft.

Morales insisted that no national or international legislation, agreement, or policy should limit universal access to the best treatment available for human beings with the virus, which has led to the deaths of more than 34 million since 1981, and with which some 37 million are currently living.

Cuba’s Minister of Public Health emphasized the need for international cooperation in the struggle against HIV/AIDS; the availability of resources; and unconditional transfer of technology – under the leadership of the World Health Organization and the UN program.