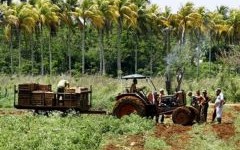 The president of Engage Cuba, an advocacy group working to end the travel and trade embargo on Cuba, says lifting the embargo would present significant opportunities for American agriculture.

James Williams says Cuba imports up to 80 percent of its food.  “Cuba currently is a $2 billion ag-import market,” he says.  “We expect if we were to lift the cap on financing for ag sales and inevitably the embargo we will see at least a $1 billion increase in ag trade to Cuba.”

He tells Brownfield that represents a significant opportunity for several states.

Indiana:
“Soybeans are a huge, huge opportunity for Indiana,” he says.  “Indiana is the number 3 exporter of soybeans in the US and for Cuba – close to 25 percent of its imports are soy products.”

Iowa:
“We’re seeing a lot of opportunities for the grains – corn and soy,” he says.  “But then also meat continues to be a big priority, too.  Poultry is what they have been predominately importing from the US.  But there is a major opportunity for pork as well.”

Missouri:
He tells Brownfield while there is significant opportunity for major grain producing states – Cuba is also a huge potential export market for rice producing states like Missouri (Missouri ranks 4th in US states in rice exports).  “Prior to the embargo being in place, the US was the number one rice exporter to Cuba,” he says.  “Cuba currently, even with all its limitations economically, Cuba is the number one rice consuming country per capita.  Right now, US rice is not exporting one dollar worth of goods to Cuba.”

He says American agribusinesses are losing market share due to current US policies.  “Even though we’re the dominate ag producer and exporter to the Caribbean,” he says.  “In a country just 90 miles off our shores we’re falling behind to European countries that are across the Atlantic Ocean.  This is a huge, huge lost opportunity and a major benefit to US agriculture if we were to get this fixed.”