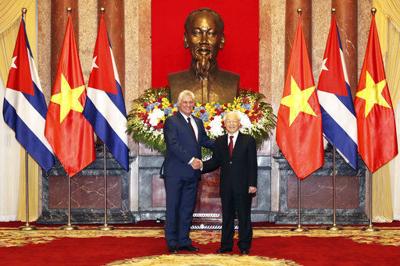 Through their new cooperation tools, Cuba and Vietnam intend to boost bilateral exchange from US$224.3 million in 2017 to US$500 million in 2022.

Nov 9 (teleSUR) Cuba President Miguel Diaz-Canel, during the first day of his official trip to Vietnam, met with President Nguyen Phu Trong at the official government palace in Hanoi.

The main objective of the high-level meeting was fulfilled. Both countries strengthen their economic ties by signing off on a framework of agreement related to bilateral cooperation, including rice production in the Caribbean country that extends from 2018-2022, as well as a treaty for mutual legal assistance in criminal matters.

“The Cuban people always respect a faithful friend like Vietnam and take the example of their valuable experience in the construction and development of the country,” Diaz-Canel said.

Along the same lines, Trong stressed that “Vietnam and Cuba will maintain close and comprehensive cooperation and deepen their exemplary fraternal relations.”

“We agree on the importance that future generations of Cubans and Vietnamese are faithful to the legacy of #HoChiMinh and of #FidelCastro, promoters andadvocates of friendship between both peoples” statements of @DiazCanelB after an encounter with his counterpart Nguyen Phu Trong.

Both leaders also reflexed on the historic friendship between Vietnam and Cuba, two countries which became symbols of resistance to the United States in the 1960s.

Through their new cooperation tools, Cuba and Vietnam intend to boost bilateral exchange from US$224.3 million in 2017 to US$500 million in 2022.

On the other hand, Vietnam exports rice, coal, chemicals, textiles and electronics to Cuba.