Cuba: ‘Our Links With Africa are Indestructible’ 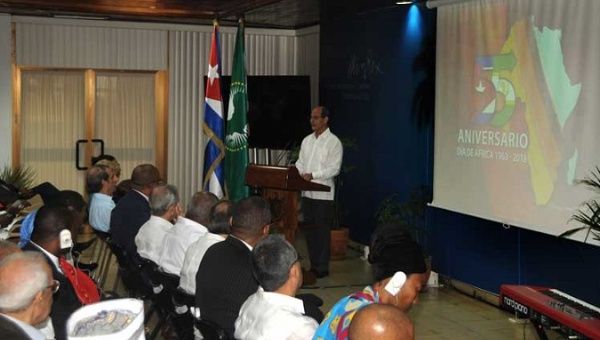 An event to commemorate the founding of the Organization for African Unity (OAU). | Photo: Twitter @embacubaven

The Vice Foreign Minister said that the links between Africa and Cuba “are an essential part of Cuban history, cemented in deep cultural roots.”

May 25 (teleSUR) In an event held for Africa Day, which commemorates the founding of the Organization for African Unity (OAU), the precursor to the African Union (AU), Cuban officials celebrated links between the Caribbean island and African nations.

“I tell you that the relations between Cuba and Africa are indestructible and that we will continue reinforcing the bonds of cooperation and solidarityin benefit of our people,” Vice Foreign Minister Rogelio Sierra said.

He said that the links between Africa and Cuba “are an essential part of Cuban history, cemented in deep cultural roots derived in shameful slavery.”

Cuba, since the revolution led by the late Comandante Fidel Castro, has consistently shown its solidarity with African countries, from the revolutionary fighters they sent to Angola, to the doctors sent to West Africa during the Ebola outbreak.

The Foreign Minister spoke on the importance of African countries in international relations and emphasized their right to have permanent representation in the United Nations Security Council.

According to Sierra, Cubans are working on projects in nearly every African country, with more than five thousand Cubans offering services ranging from healthcare, education, construction, sports, and agriculture. Nearly nine thousand African students are currently studying in Cuban universities, he said.

In addition to Sierra, the event was headed by the Cuban Vice President, Salvador Valdes, the Foreign Relations Minister Bruno Rodriguez, and the Head of International Relations of the Central Committee of the Communist Party, Jose Ramon Balaguer.