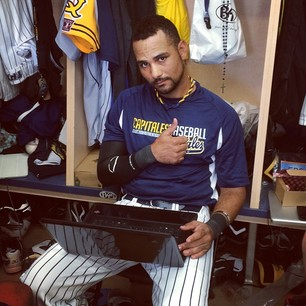 CUBA STANDARD — The older brother of Cuban baseball star Yulieski Gourriel signed with the Québec les Capitales minor league team for the summer, making him the first Cuban player to become a professional in Canada with the blessing of his country’s authorities.

Yunieski Gourriel, 32, has been in Québec since July 10, according to les Capitales, and is eager to play for his new team.

Cuba’s Escambray daily reported that Gourriel’s contract was negotiated between Michel Laplante, president of Les Capitales, the Cuban Baseball Federation, and Cuba’s INDER sports institute. Laplante said Gourriel’s contract is similar to that of any player in the Can-Am league, to which his team belongs.

According to Can-Am rules, the salary cap for a rostered player is $4,000 per month, depending on the roster size.

“Yuniesky will play for us this summer, and then go back to Cuba in September to get ready for the professional Cuban league,” Laplante said.

In 2013, the Cuban government lifted its ban for athletes to perform as professionals abroad. Yunieski follows a trail blazed by Yulieski, 30, who is under contract with the Yokohama DeNA BayStars. In addition to the Gourriel brothers, Cubans playing abroad, with the blessing of INDER, are Frederich Cepeda and Hector Mendoza (Yomiuri Giants), Alfredo Despaigne (Chiba Lotte Marines), and Norberto González and Joan Carlos Pedroso, who play in Italy.

Gourriel sets a political precedent that is in contrast to Major League Baseball’s restrictive practice regarding Cuba. Citing U.S. sanctions against Cuba, MLB still forces Cuban players to defect before joining its teams.

Les Capitales are a franchise of the Durham, N.C.-based Canadian American Association of Professional Baseball, which operates a five-team league.

In a phone call from Québec, Can-Am league Commissioner Miles Wolff said that this is an issue between the club and the Cuban player. Asked about the MLB’s restrictive approach to Cuban players, he said he didn’t know the details.

“It’s silly, that’s my first thought,” Wolff said. “I don’t know all the reasons, I’m sure there’s politics involved in this. But for the Cuban players to never go home again, that’s certainly very difficult for them.”

“From the league’s point of view, getting outstanding Cuban players helps us,” Wolff added. “It’s an interesting experiment. The interesting thing will be next year. If Yuni’s experience is good, maybe the Cuban government will expand the number of players.”

The Capitales president said he didn’t expect any troubles with U.S. authorities, nor does he see any connection with the MLB and its policies.

“I don’t see any challenges toward MLB — not more than Canada toward United States,” Laplante said.