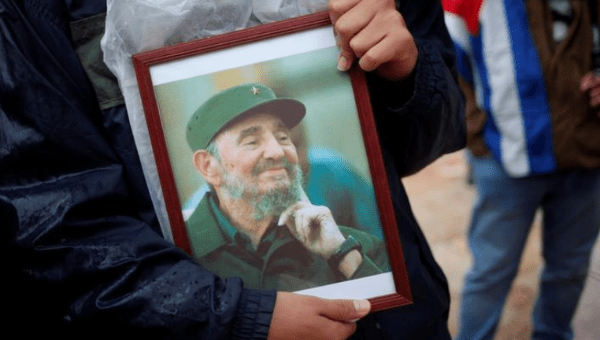 Nov 24 (Telesur) Cuba, Nicaragua and Argentina are set to commemorate the first anniversary of the death of Cuban revolutionary Fidel Castro this weekend.

Ceremonies in memory of the deceased leader will take place throughout Cuba, with major ones being held in Havana and Santiago de Cuba.

Signs and banners reading,“Fidel is With Us” and “I am Fidel” cover the streets. Students will hold a vigil on Saturday night at the University of Havana, the deceased leader’s alma mater.

In Nicaragua, several events are planned to commemorate the Cuban revolutionary. Francisco Lacayo, ex-representative of UNESCO in Havana, will lead a conference titled, “The Commander Fidel Castro Ruz and Education, Science, Technology and Innovation for Social and Human Transformation” at the National University of Engineering in Managua.

The National Agrarian University in Managua will display and exhibit native medicinal plants in homage to Fidel’s dedication to health and medicine in Latin America. A Cuban Revolution art gala will then be held at the Ruben Dario National Theatre in the Central American capital.

Also in Managua on Saturday morning, professional Dominican baseball players will play a match with children to commemorate Fidel. The deceased leader was given the title Doctor Honoris Causa by the Autonomous University of Nicaragua in Leon this week for his dedication to political and social issues.

Argentina will also commemorate Fidel with a cultural ceremony at the Roma de Avellaneda theatre in Buenos Aires. Cuba’s ambassador to Argentina said that he was one of the greatest leaders of the 20th and 21st centuries.

Since the revolutionary leader passed on Nov. 25, 2016 at 90 years of age, no streets, squares or buildings bear his name, and no statue or monument has been erected in his honor in Cuba, as per his request.

Fidel was born in 1926 and became a leftist while a student at the University of Havana. Between 1953 and 1959, Castro led the fight to free Cuba from the Fulgencio Batista dictatorship, ushering in a revolutionary government on Jan. 1, 1959.