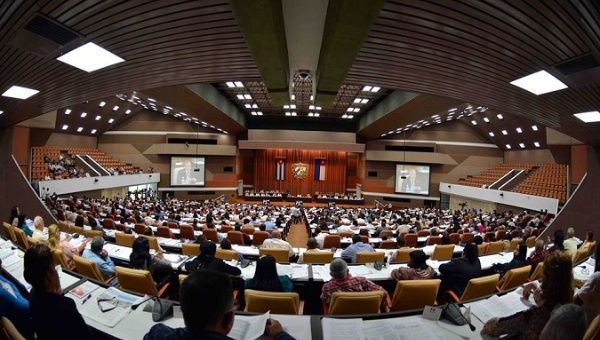 The new constitution would see new laws and policies seeking to maintain the socialist and revolutionary character of the Cuban state.

July 23 (teleSUR) The Cuban parliament unanimously approved the Constitution Project Sunday, which will be submitted for a popular consultation from August 13 to November 15 of this year.

The announcement was made by the president of the National Assembly of the People’s Power of Cuba Esteban Lazo Hernández, noting that “this discussion has great value, and is that it helps to introduce our people in the debate we have to carry out in the next months. ”

After two days of debate in the legislative plenary, the lawmakers voted and approved the Constitution Project of the Republic of Cuba with the modifications made during its analysis.

Also, President Miguel Diaz-Canel concluded the session by offering a speech in which he highlighted the work done by the lawmakers and said that the reform seeks to update the Constitution “so that the institutionality is strengthened”

“The previous study of the sustained debate has been very useful, a passionate, committed, critical, patriotic and contributory debate centered on the humanism of Fidel and Raúl,” the president said.

Díaz-Canel also  pointed out that the project “will contribute, after the referendum and popular referendum, to strengthening the unity of Cubans around the Revolution.”

“In the next few days the preparation of the selected partners in each of the provinces will begin to carry out the process of popular consultation.”

He added that this exercise of direct participation of the people is based on the most genuine democracy, and “every Cuban will be able to freely express their opinions and contribute to achieving a constitutional text that reflects the future of the country.”

The new constitution will see new policies that will seek to maintain the socialist and revolutionary character of the Cuban state with a focus on promoting economic growth and social policies that would benefit the entire Cuban population and minorities in the country. One of the major changes to the constitution would be the recognition of gay marriage and the strengthening LGBT rights.