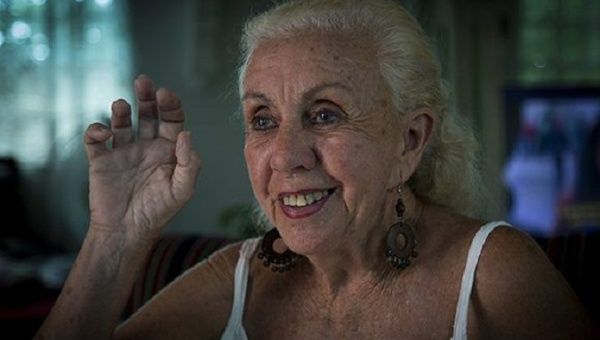 June 17 (teleSUR) After dedicating 70 years to the arts and youth education, Cuba’s Iraida Malberti Cabrera was laid to rest early Saturday morning at the age of 81 years.

A ballet icon and director of a national television program, Malberti’s contribution to Cuban culture will be remembered with fondness in the arts community.

Just one year after the revolution in 1959, the choreographer joined forces with her brother, Juan Carlos Cremata, to launch the first episode dubbed ‘The World of Children,’ starring Carmen Solar and Edwin Fernandez.

In an interview with Cuba Debate, Malberti explained: “I started at the age of three years; my mom took me to the ballet. I went through the Supreme Court of Art, I became a Doctor in Pedagogy in 1962.

“I am a teacher of Ballet and Folkloric Dances thanks to an emerging course organized by Chely-Ramona de Saá, and I am a television director.”

An art director, choreographer, script writer, filmmaker and mother of three talented children, Malberti made a name for herself with her take on classical ballet and folk dances which debuted on TV. Most notable were the prohgrams ‘Tía Tata Tells Stories,’ ‘The Circus,’ ‘And Says A Butterfly’ and ‘When I Grow Up.’

Malberti told Cuba Debate one of her favorite experiences was filming a program which celebrated anniversaries in various countries, entitled ‘Variedades’ (Varieties).

“We had to investigate tenaciously. Some countries did not have anything written – there was no Internet – we went to and fro, they were the songs and the games of the children in each of the regions.

“Once I had to interview a Scandinavian diplomat. When I arrived he said: ‘I do not have anything, I do not have children’s songs’ and I said: ‘But you have to remember when you were a kid.’

“He was a very tall man, a huge fishing rod, very serious. And it was comical, because that man ended up jumping, singing and dancing in his office. He taught me the games and the songs that he himself enjoyed when he was little. And the repetitions several times, comical.”