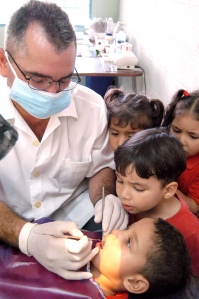 Cuban medicine is unique in its international focus. Even while its people faced a severe shortage of physicians, the revolutionary government sent its first medical team abroad in 1960 to respond to an earthquake in Chile. With a significantly larger medical workforce today compared to immediately after the Revolution, the scope of Cuban medical internationalism has increased dramatically- more than 30,000 Cuban health professionals currently work in 70 countries, joining the ranks of approximately 135,000 Cuban health workers in total that have served in over 100 countries.[1] These individuals have helped millions of lives, having administered over 5 million vaccine doses between 1998 and 2004.[2]

The nature of Cuban medical intervention abroad varies from country to country. While Venezuela receives physicians in exchange for subsidized oil, the Cuban government elsewhere has seen millions of dollars in medical diplomacy generate relatively little political and economic returns.

The worst periods of social and economic turmoil in the history of revolutionary Cuba, the months immediately after the Revolution as well as the “Special Period,” took place when the government did not have a primary benefactor. The USSR had supported Cuba since the early 1960s, and was Cuba’s major trading partner until the USSR’s collapse. The fall of the Soviet bloc marked the beginning of the Special Period, in which Cuba saw its imports and exports decrease by 75 and 79 percent respectively.[3] Facing a serious fuel shortage, “transportation systems buckled… twenty-four-hour power outages became [regular, Havana’s] water delivery system worsened, and sanitation systems became intermittent and unreliable… [making] for a desperate health scenario”.[4] The government had to privatize areas of the economy in order to reduce the number of employees on the government payroll, which marked a blow to the ideological goals of the revolutionary government.

Luckily, Cuba found a new ideological partner and Petro Papi[5] in 1998 in the form of Venezuelan president Hugo Chávez, who had control over the world’s sixth largest confirmed oil reserves.[6] On a superficial level, Chávez and Castro were natural trading partners because they were both socialists. More importantly, the constitution that the Hugo Chávez’s government redrafted after his election in 1998 reflects and supports many aspects of Fidelismo. Article 83 declares health a “fundamental social right,” while Article 84 resolves to create a national system of public health managed by the state.[7] Such similar views on medicine were a natural source of healthy bilateral relations. Especially since the signing of the Cuba-Venezuela Agreement in 2004, these two nations have enjoyed a level of deep collaboration.

Given the sparse provision of public health care in Venezuela four years after having declared it a human right in its constitution, a pro-Chávez mayor established Plan Barrio Adentro (Inside the Neighborhood), which created health clinics within poor urban areas lacking healthcare alternatives. Since only two of the fifty initial Venezuelan applicants agreed to work in these centers,[8] Barrio Adentro opted to import Cuban doctors who were more than willing to work in these disenfranchised neighborhoods. Even with only 100 physicians, the first year saw over 9 million health consultations.[9] 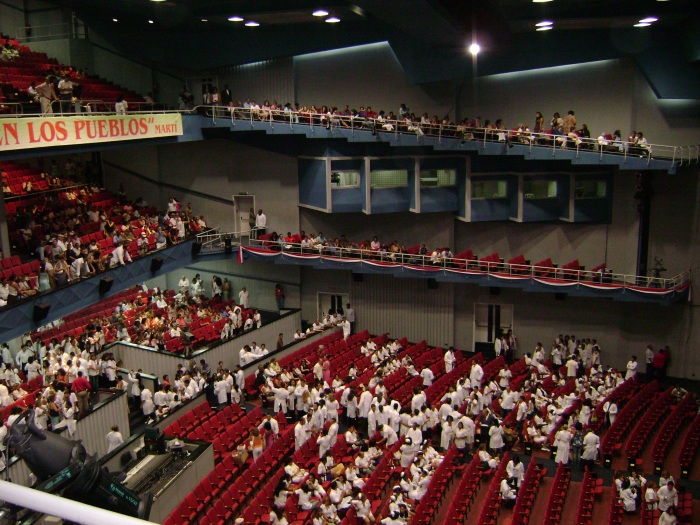 Given the incredible results achieved within the first few months of operation, Chávez decided to transform Barrio Adentro into a national program, re-christening it Missión Barrio Adentro (MBA). Instead of paying for these medical services directly, Article IV of the Cuba-Venezuela Agreement of 2004 called “for preferential pricing for Cuba’s expropriation of professional services vis-à-vis a steady supply of Venezuelan oil, joint investments in strategically important sectors for both countries, and the provision of credit”.[10] Through this method, 31,000 Cuban doctors and dentists took and continue to take part in the program at any given moment in hundreds of clinics across Venezuela, carrying out approximately 150 million consultations and saving about 20,000 lives each year.[11]

The program nevertheless has drawn criticism. First, many of Venezuela’s doctors claim MBA is a threat to their livelihoods. However, Cuban medical workers tend to operate in areas where no other doctors are found. These areas, which tend to be violent and poor, are unappealing to most Venezuelan doctors, who may stand to enjoy more secure employment opportunities (both literally and economically) in wealthier areas. In fact, a number of Cuban personnel have been random victims of violence in the barrios.[12] Meanwhile, Rachel Jones, in The Lancet,deems MBA a half-success, given that the Venezuelan government did not meet its goals on paper. For example, physicians occupied only 30 percent of clinics built, partly because four thousand Cuban health workers had been sent to work in Bolivia and in other countries.[13] However, Feinsilver notes the improvement in health indicators due to MBA, and asserts: “anyone who has worked on the ground in the social and economic development and has tried to implement large-scale social programs… knows the difficulty in accurately determining targets to be achieved and more importantly, achieving them and on time.”[14]

Lastly, and most importantly, opposition figures accuse MBA of being “a politically motivated waste of billions”,[15] largely ineffective at treating diseases once individuals actually contract them. The government funds preventative Cuban health care through $3 billion in oil savings annually, [16] utilizes unnecessarily expensive drugs purchased through the Cuban government, and spends four times more on international politics than social programs.[17] Venezuelans still endure medicine and medical machine shortages. There is a persistent lack of doctors, as native physicians often find work abroad because of unrealistic price caps placed on medical procedures. For instance, dialysis treatment has been capped at 200 bolivars ($30), despite costing 5,000 bolivars.[18] Even though the Venezuelan government does spend more than Cuba in their arrangement, and though these doctors focusing on preventative care are unable to treat serious diseases, their presence is better than the pre-Chávez alternative for many in the barrios ridden with easily-preventable diseases.

A less controversial product of Cuban-Venezuelan relations is Operación Milagro (Operation Miracle). Since 2005, Cuban medical workers in 37 clinics located in eight countries[19] have provided eye surgery to over 1.6 million individuals from around the world,[20] many of whom are residents of Bolivarian Alliance for the Americas (ALBA) member states, which is a trading bloc designed as an alternative to the American-supported North American Free Trade Association (NAFTA). Interestingly enough, even Mario Terán, who assassinated Che Guevara in 1967, received eye treatment from a team of Cuban doctors working in the El Chapare region of Bolivia.[21] As in the case of MBA, Venezuela funds the Cuban doctors, who then provide optical surgeries free of charge.

Finally, Article IV of the Cuba-Venezuela Agreement states: “the Republic of Cuba… will offer free training of Venezuelan personnel”.[22] The Latin American School of Medicine (ELAM) is an internationally oriented institution based in Cuba. Founded in 1999, the primary goal of ELAM is to create an “army of doctors” dedicated to promoting Cuban medical internationalism. From approximately thirty countries worldwide, ELAM graduates are expected to return to their home countries to work in underprivileged areas, employing the education they acquired in Cuba concentrating on preventative medicine. At ELAM’s first graduation in 2005, Castro pledged to provide 100,000 scholarships to prospective medical professionals from primarily the Global South over the next decade, 60,000 of which would be set aside for Venezuelan medical students.[23]

At the same ceremony, the Chávez government vowed to establish a second ELAM campus in Venezuela. Eight years later, ELAM Dr. Salvador Allende on the outskirts of Caracas boasts 476 medical students from 23 countries,[24] and 1,000 students are enrolled for 2014.[25] Given that Cuban doctors cannot stay in these countries forever, these medical schools create thousands of physicians that make long-term medical interventions possible, which “are necessary in order to address the most pressing, albeit basic, conditions of suffering”.[26][27]

In reality, ELAM graduates often face obstacles when returning to their home communities. Many countries lack an existing support network as exists in Venezuela for physicians who wish to work in underprivileged areas. Instead, doctors with little financial savings have to work out of their own pocket to serve their communities, covering the cost of establishing clinics and day-to-day expenses. Consequently, as Ecuadorian ELAM graduate Gonzalo lamented: “[ELAM graduates] will take their degrees and work in the private sector. There is money for them there. That is where all doctors are going to go; none of them are working in the communities. There is no other place for them to go.”[28]

Clearly, Cuba benefits greatly from an economic standpoint in this oil-for-doctors trading scheme. Saving billions of dollars through subsidized oil on top of $1.2 billion in joint venture projects has made Venezuela an invaluable trading partner for Cuba. Apart from Cuban doctors and their families, average Cubans have benefitted as well, since they now have a greater selection of consumer goods originating from Venezuela.

Cuban medical diplomacy in Venezuela has developed a deep political connection as well. After the Cuba-Venezuela Agreement of 2004, these two nations have drastically altered the regional political arena by challenging American dominance on the continent, particularly through ALBA. Since belonging to this organization provides development opportunities such as Operación Milagro and subsidized goods, a growing number of leftist governments have opted to become ALBA member nations.

Cuba does sacrifice some benefits by sending a quarter of its medical professionals abroad. This includes a decreased doctor-to-patient ratio of approximately 1:170[29] and a medical system less personalized than it used to be.[30] Nevertheless, given the overwhelmingly positive political and economic consequences of Cuba’s relationship with Venezuela, “oil-for-doctors” has no doubt been one of the most significant medical missions in Cuba’s history.

[27] Interestingly enough, Huish also asserts that Cuba is only able to engage in such long-term missions because of its one-party system, which is more likely to stick to long-term goals than a multi-party state whose practices change on a regular basis