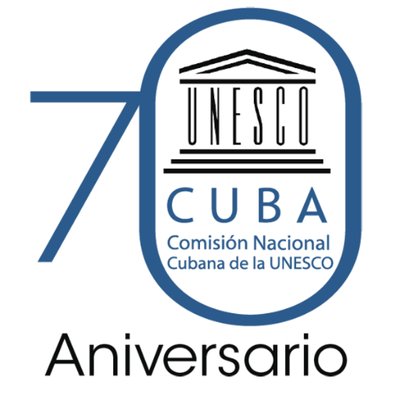 Two commemorative postage stamps were presented on 29 August at the Ministry of Foreign Affairs in Havana as part of the celebrations honouring the 70th Anniversary of the Caribbean nation’s entry to the Organization and the founding of the Cuban National Commission for UNESCO (CNCU).

Presiding over the ceremony were Cuban Deputy-Minister of Foreign Affairs, Abelardo Moreno, the First Deputy-Minister of Communications, Jorge Luis Perdomo, the Director of the UNESCO Regional Office for Culture in Latin America and the Caribbean, Katherine Muller-Marin, the President of the Union of Writers and Artists of Cuba, Miguel Barnet, and CNCU President Oscar León González.

Representatives of national agencies and institutions working in UNESCO’s areas of competence and programmes, attended the ceremony alongside former presidents of the Cuban National Commission for UNESCO, former ambassadors of Cuba to the Organization and former members of the Executive Board, as well as Cuban personalities who have collaborated with the CNCU.

The postage stamps depict the nine Cuban sites inscribed on the UNESCO World Heritage List and the country’s two inscriptions on the Representative List of the Intangible Cultural Heritage of Humanity: Tumba Francesa (inscribed in 2008) and Rumba in Cuba, a festive combination of music and dance and associate cultural practices (inscribed in 2016).

The 70th anniversary of relations with UNESCO and the creation of the CNCU, have been the subject of celebrations in Cuba throughout this year, which notably included the sixth edition of International Jazz Day in April and the Rumba Route 2017, which has been travelling to different parts of the country in August.