Cuba is leading the way in lung cancer vaccines 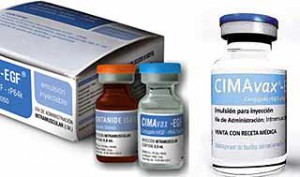 Roswell Park Cancer Institute in New York finalized an agreement with Cuba’s Center for Molecular Immunology last month to develop CimaVax – a drug that’s already on the market in Cuba and has treated roughly 1,000 people with lung cancer.

The vaccine isn’t preventative, according to Pop Science, but attacks a patient’s already-existing cancer.

Wired reports that a 2008 trial showed lung cancer patients who received the vaccine lived an average of four to six months longer than those who didn’t.

And that’s not the only cancer-fighting drug that could come out of the country. A biologist at the Feinstein Institute for Medical Research has been working on another therapeutic vaccine with the Center for Molecular Immunology called Racotumomab.

During the 55-year rift between the U.S. and Cuba, Fidel and Raul Castro made big breakthroughs in preventive medicine – The National Immunization Program currently protects children from 13 disease including polio, hepatitis and meningitis B.

The U.S. stands to benefit from Cuba’s help in treating lung cancer. According to the Centers for Disease Control and Prevention, it is the deadliest cancer in America.

But Congress still needs to lift the Cuban embargo before more extensive collaborative research can be done.