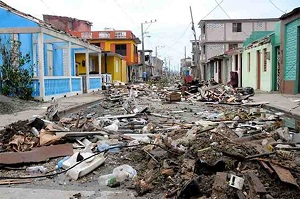 More than 100 construction modules were delivered free to people in Baracoa, whose houses were totally destroyed by Hurricane Matthew which ravaged the eastern tip of the island.

The module consists of 500 tiles, nails, pieces of wood, cement, sand, and they are distributed in the areas of the center of the city of Baracoa, to offer temporary facilities for all those people who lost their houses and goods.

Since last Thursday, delivery of construction materials was announced, and the cost would be much below its real value, but last night it was known by decision of the Council of National Defense, that materials would be free for those affected residents in this city, Provincial Defense Council president Dennis Legrá emphasized.

To this end, they opened numerous temporary outlets for the storage and distribution of the modules, and, ‘everything with a strict control by technicians of the Housing and Retail Trade entities in charge of investigating and distributing these resources’, Legra said .

Affected people received a package of free food, mostly residents who were greatly affected by the hurricane in mountainous areas of the municipalities of Maisí, Baracoa, Imias and San Antonio South, the territories worse hit by Matthew, as informed the Provincial Council.

Meanwhhile, for the last four days it has rained continuously,increasing the problems of affected families and limiting the recovery works in the residential sector, in particular.