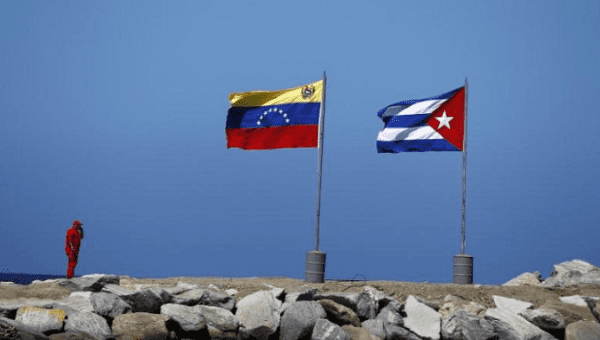 A worker stands next to Venezuelan and Cuban flags in a beach in La Guaira, in the state of Vargas outside Caracas. | Photo: Reuters

Cuba said the sanctions are counterproductive to Venezuela’s efforts to promote dialogue.

Cuba’s Deputy Foreign Minister, Rogelio Sierra Diaz, criticized the new measures, noting that they interfere in the country’s internal affairs and are counterproductive to the Bolivarian government’s efforts to promote dialogue.

“It is contradictory that the EU Foreign Affairs Council believes the only way to deal with the situation in Venezuela is through constructive dialogue and negotiation, while at the same time imposing sanctions, blacklists, and restrictions on international trade which harm the people,” he insisted, Granma reported.

Sierra Diaz also added that EU’s decision goes against both international law, as well as the Proclamation of Latin America and the Caribbean as a Zone of Peace, which was signed by CELAC members in 2014.

The minister affirmed Cuba’s “unwavering and unconditional solidarity” with the Bolivarian Revolution, as well as with its civil-military union and the government of President Nicolas Maduro.

The new sanctions, put into place on November 13, include a ban on arms sales and the export of military and surveillance equipment. While they do not target any Venezuelan citizen, the EU warned that such measures “will be used in a gradual and flexible manner and can be expanded,” if need be.

Maduro had responded by saying the sanctions are hostile, harming both Venezuelans and the nearly 1 million Europeans in the country. He called on the EU to support dialogue, rather than unilateral measures.