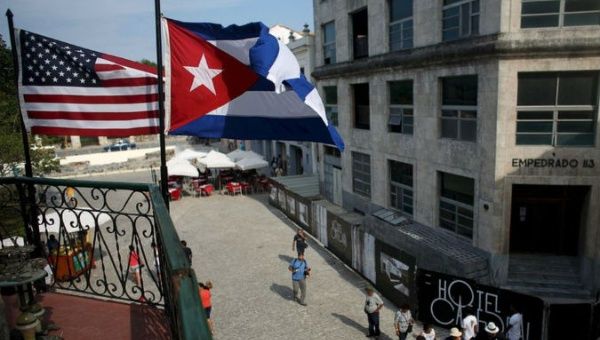 A U.S. expert said the cause was “mass hysteria,” a term used for outbreaks among groups of people that are either wholly or partly psychosomatic.

Oct 25 (TeleSur) – Cuban officials conducting an investigation into U.S. claims that its diplomats were victims of possible “sonic attacks” in Havana, have dismissed the accusations as pure “science fiction.”

Coronel Ramiro Ramirez, head of the Cuban security detail responsible for the protection of diplomats on the Caribbean island, explained that such an acoustic weapon, even if employed by a third party as U.S. officials have suggested, would have affected the health of other people in the general area and could not have singled out U.S. diplomats as part of a deliberate attack. Ramirez added that the sound would have surely attracted public attention.

He accused the United States of trying to slander the socialist country.

An expert in the criminal investigation unit of the Cuban Interior Ministry reiterated that “from a technical point of view” U.S. arguments concerning the case are absolutely “unsustainable,” according to PressTV. Lieutenant Colonel Jose Alazo dismissed the U.S. hypothesis of a sonic attack against its diplomats on Cuban soil as nothing more than “science fiction” adding that “it’s impossible.”

There’s been no response from Washington since Cuban officials refuted U.S. claims.

Mark Hallett, head of the human motor control section of the U.S. National Institute of Neurological Disorders and Stroke, attributed the unexplained ailments experienced by a number of U.S. diplomats to “mass hysteria” prompted by the media, not sonic attacks.

“From an objective point of view, it’s more like mass hysteria than anything else,” adding that “mass hysteria” is the term used for outbreaks among groups of people that are either wholly or partly psychosomatic.“There has been an exploration of possible causes for this and nothing has been found and the notion of some sonic beam is relatively nonsensical,” he said.

Earlier this month U.S. President Donald Trump said, without providing a shred of evidence, that Cuba was responsible for the inexplicable physical harm done to the U.S. diplomats.